The Glenturret, the oldest working distillery in Scotland, recently announced the first release in their Trinity series called The Provenance. A collaboration between the whisky makers and renowned French glassmakers Lalique, this limited edition, non-chill filtered single malt whisky is bottled in a crystal decanter, specially designed by Lalique’s artistic and creative director Marc Larminaux.

The whisky within each decanter was drawn from three casks filled in 1987 and bottled on the liquid’s 33rd birthday, December 4, 2020. According to The Glenturret’s master blender Bob Dalgarno, the whisky offers “rich notes of ginger, brandy-soaked cherries and plump, juicy sultanas, followed by hints of cinnamon sticks, dates and soft whispers of oak and green apple.” 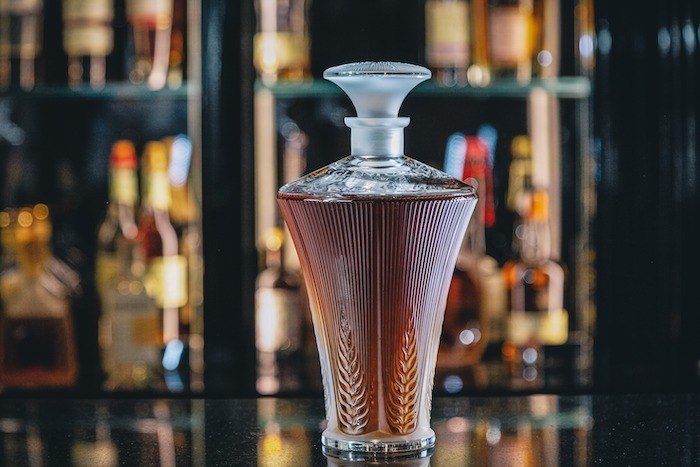 The Trinity Provenance comes just a few months after The Glenturret released a new range of expressions, including their Triple Wood, a 25-year-old single malt, and a 30-year-old single malt—all featuring new labels and bottle designs (also designed by Lalique).

All of these releases are among the first moves by Glenturret Holding, a recently formed joint venture between Lalique Group and Swiss entrepreneur Hansjörg Wyss, which took ownership of The Glenturret Distillery in 2019. With the acquisition, Glenturret Holding helped increase whisky production and hire more staff, as well as adding a Lalique shop to the distillery’s visitor center.

“2020 has been a challenging year for all, but also a very exciting year for us,” The Glenturret’s managing director John Laurie told the Moodie David Report. “We recently introduced a fresh visual brand identity as well as six new expressions, hand-crafted by our incredible team at the distillery in Crieff. Adding The Glenturret Provenance is an important milestone for us – this is a whisky to be savoured slowly, which fits in perfectly with our distillation process as we still do everything here by hand.”

As only 320 of these decanters are being made, the SRP for each bottle of the Trinity Provenance is £9,800 (about $13,100 USD) and is available through the distillery directly.

21
Shares
2.6k
Views
Share on FacebookShare on TwitterGet Our Newsletter
Get The Macallan® Rare Cask at ReserveBar. Shop now!