Premium Scotch whisky distillery The Glenlivet, owned by spirits giant Pernod Ricard, is known for offering a range of bottlings to fit many price points in someone’s wallet. If you happen to be on the super high end of things this could mean you have interest in their very occasional Vintage collection, known to be upwards of $25,000 a bottle. It is to this line the distillery has returned, debuting a 50 year old offering.

The Glenlivet Winchester Collection Vintage 1967, according to those behind it, is a 50 year old Scotch whisky that’s a blend of rare single malts, the youngest of which was laid down by former The Glenlivet Master Distiller, Robert Arthur, in 1967. It was bottled in June of last year, and is both non-chill filtered and of cask strength. 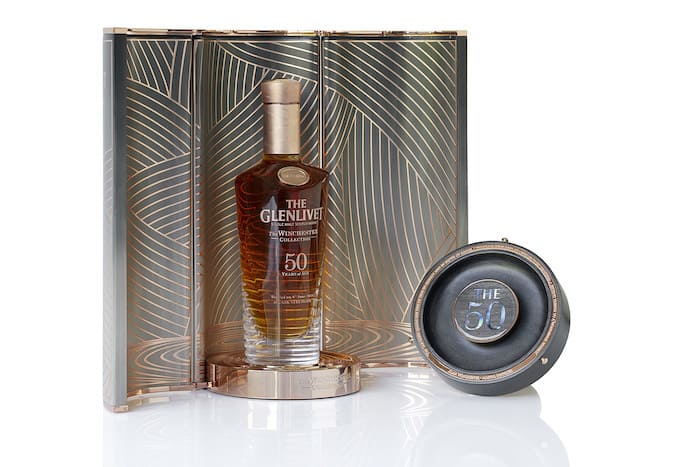 “The launch of Vintage 1967 is a momentous occasion for The Glenlivet, and a particularly proud one for me personally,” said the Glenlivet Master Distiller Alan Winchester in a prepared statement. “To have my name associated with one of the finest single malts that money can buy is an honor – what a fantastic way to celebrate more than 40 years in the Scotch whisky industry. By collaborating with the talented Bethan Gray, we have been able to epitomize not only Vintage 1967’s luxurious quality but also the craftsmanship that led to its creation. The result is a beautiful and captivating bottle that ensures Vintage 1967 is a feast for the eyes as well the palate.”

As is the case with any high end expression like this, it is set inside a super premium bottle and box. More specifically both are designed by award-winning British designer Bethan Gray, who is said to have gathered influences on the grounds of the distillery itself.

The bottle is blown by master glassblower Brodie Nairn and then hand-cut, creating an ombré color effect that reportedly “mimics the aging process of the liquid inside. It is then engraved and hand-painted, making each one unique. The hand-stained birds-eye maple case is made using solid copper overlays that reflect The Glenlivet’s charred barrels and copper stills. Created by hand by artisans, the technique used to overlay the delicate copper was invented specifically for this case in its curved form. The mother-of-pearl inlaid into the case has been inspired by the local freshwater pearl mussel shells indigenous to the Spey River.”

As it stands now 150 bottles of The Glenlivet Winchester Collection Vintage 1967 are being released globally, each pricing around $25,000 USD. This offering joins this collection’s previously released Vintage 1966 in 2016 and Vintage 1964 in 2014.