The Glenlivet Capsule Collection: This Is Why We Can’t Have Nice Things

Editor’s Note: This article comes to us courtesy of Spirited Matters as a repost. Author credit goes to Billy Abbott.

Despite its often staid appearance, the whisky industry is interested in doing new and exciting things. At the beginning of October 2019, Glenlivet embraced that and launched something a little bit different – cocktails served in edible pouches: The Glenlivet Capsule Collection. I went to the launch, drank/ate some great cocktails and went home happy that I’d tried something new.

The internet, however, was having none of it. 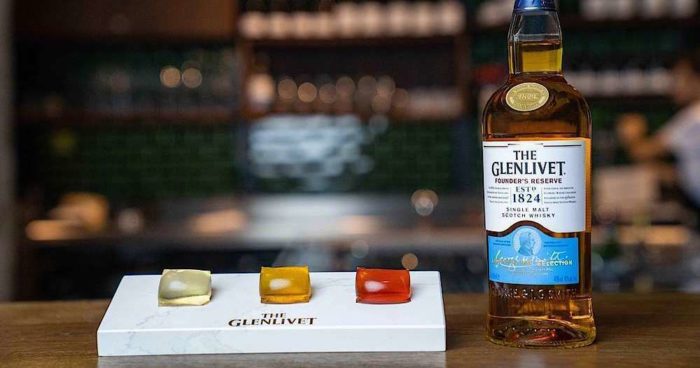 What are Glenlivet Capsule Cocktails?

Let’s start with the brand’s video, for a bit of background:

Here’s a quick summary for those who don’t want to or can’t listen to the video:

For London Cocktail Week, The Glenlivet, the world’s second-biggest whisky brand (by some measures) has partnered with award-winning bartender Alex Kratena to serve three whisky cocktails in his bar Tayēr + Elementary, each served in an edible, biodegradable capsule made by Notpla, a company working to find alternatives to plastic. The cocktails – served in 23ml measures, the smallest container Notpla can currently make – can be drunk by nibbling off a corner and sipping, or by sticking the whole capsule in your mouth and biting down to burst it.

In short: the internet showed that it is, collectively, a dick, and that we can’t have nice things.

To start with, most people didn’t bother reading beyond the preview text that popped up on the Twitter and Facebook posts, and saw the words “Glenlivet whisky” alongside a small, coloured pouch of stuff. Thus started the soon-to-be-canonical stages of Glenlivet Capsule Cocktail Grief™:

While I assumed stage(s) 1 and 6 would appear before long, stage 2 occurred to me shortly after I left the launch event, and stage 3-5 are all legitimate comments with answers (see below), number 7 did cause me to pause for a moment.

Surely there’s a Rule of the Internet for ‘if you can think of it, people will put it up their bum’?

1, 6: It’s blasphemy to put whisky in a cocktail

No, it’s not. Get over yourself. And it’s not as if they’re mixing ancient Brora with ginger beer. These are cocktails using Glenlivet’s entry-level Founder’s Reserve to create drinks that expand on the flavours in the whisky:

Some @theglenlivet cocktails this with a difference this evening, a collaboration with @alex_kratena and @notpla – seaweed-based edible capsules full of drink. The @tayer_elementary katsu sandos aren’t bad either… They (cocktail caps and sandos) are available all @londoncocktailweek. . #cocktails #whisky #glenlivet #theglenlivet #noglassrequired #originalbytradition

They were put together by Alex Kratena and his team, and, as you’d expect from one of the world’s most respected bartenders, the drinks are very good.

3. These will be bought by kids

They are available in one bar for ten days during London Cocktail Week. The bar is over 18s only and the capsules only last a few weeks – the combination of being biodegradable and filled with a mixture of sugar, acid and alcohol (amongst other things) means they break down relatively quickly.

They are not an ongoing product and will not be available to take away. They’re also only being served as an ‘amuse bouche’ on arrival at the bar, rather than being for sale. If they were, they would be pricy – based on previous similar Notpla projects and the price of Tayēr + Elementary’s cocktails, I reckon they’d go for in the region of £6-8 a go. Kids would be better off sending their tallest mate into a shop to buy a bottle of Buckfast, like they do already.

4. A glass is better for the environment

Entirely true. However, the environmental focus of these cocktail capsules is more in awareness than saving the planet. The capsules are made from a seaweed-based material developed by Notpla, and from my (admittedly brief) research, they are environmentally friendly in comparison to plastic. The technology has previously been used to make water pouches for runners in marathons – they can bite off a corner, drink the water and then drop the pouch safe in the knowledge that it will quickly decompose and not pollute – and they have partnered with JustEat to trial replacing plastic sachets of ketchup.

The other half of the equation is that this is meant to be an interesting way of delivering cocktails. The experience of either biting a corner and slurping the cocktail out of the pouch or popping it in your mouth is very different to sipping it from a glass – the experiential side is a major part of the whole project, offering something new to drinkers to get them to try the capsules. It reminds me very much of the spherification craze that kicked off in the experimental end of the fine-dining world in the early 2000s.

5. You can’t nose them, so they are pointless

This has been a common mantra among some whisky geeks, but displays a misunderstanding in how your sense of taste works – you smell from both inside and outside your head.

Traditional smelling (orthonasal olfaction) involves you sniffing something directly, and it truly is one of the great pleasures of whisky. While the rumours of Johnny Depp buying bottles of Lagavulin 16 just to smell rather than drink are almost certainly untrue, inhaling the aroma of a great dram is a key part of consuming it. However, it’s not the only way you use your nose.

The tongue is fairly rubbish at tasting, distinguishing only wide categories of flavour – while the sweet, salty, sour, bitter, umami approach to describing how the tongue tastes is almost certainly inaccurate, it’s a useful approximation. Complex flavour comes from the nose, with vapours travelling around the back of the palate, into the back of the nose and on to the olfactory epithelium, where smell is sensed (retronasal olfaction). This is where we get the interesting flavours of a dram when you drink it, and it’s why you still get the full range of flavours from these capsules even though you can’t sniff them before they go in your mouth.

Not a lot. The press cycle has moved on and even the angry threads on Twitter – angrily calling people out when they tried to explain the capsules – have pretty much stopped. Although, the folks answering the confused and often angry anti-capsule people didn’t always cover themselves in glory. I’m not sure what it is about Twitter that brings out the troll in people.

The people sneering at this would do well to try some research first – these are cocktail capsules in a bio-degradable capsule. Aimed at an entirely different kind of drinker than the whisky snob, so no need for you to worry. See @DistillaSean‘s article.https://t.co/oTGaWZe09D

I spent a large amount of time over the weekend trying to explain the concept to people on Facebook that encompassed the entire gamut from ‘didn’t get it’ to ”don’t want to get it’. I ended up frustratedly using the phrase ‘you people are joyless’ on a number of occasions. But most people were fine with the project when they found out what it actually was, even if they didn’t want to try it themselves, and I had a number of great conversations with folks who were interested in both the experience and technology. Which leads me to a simple conclusion:

Not only did the video that appeared on Twitter and Facebook have no subtitles – most videos are viewed without sound – it didn’t have enough context for people to work out what was going on. This led to the comments online and then, inevitably, the news articles about the comments online, most of which fell into the same trap as the comments: these were whisky filled laundry detergent pods.

In the end, a lot of coverage has been created – and since the weekend it’s not been all quite so ‘Tide pod’-y – so it’s all looking to be a success. It did also inspire some of my favourite bits of online piss-taking for a long time. It’s an age since I’ve read a booze-up-the-bum thread on Twitter:

Ok, once again, as a physician and a friend. PLEASE DO NOT PUT THESE UP YOUR ARSES PEOPLE. https://t.co/41CjNUgLGk

The follow-up video was even better:

How 1 bleep / 1 shot can completely change an ad. pic.twitter.com/6pTlpUGHm3

And who can resist a spot of Tidethumping? 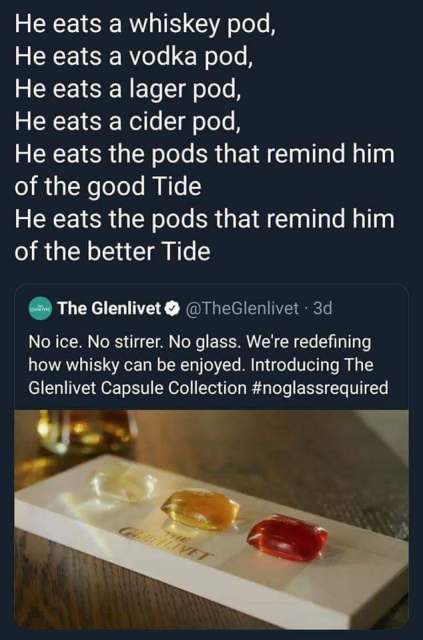 As some folks on Twitter got very het up and assumed that anyone who said nice things about the capsules was involved with selling them:

I went to the launch event, where I ate a bunch of capsules, drank some cocktails and munched on an excellent katsu sando. Go to Tayēr + Elementary for the drinks, stay for the pork sarnie.

A mate of mine worked on the project for Glenlivet and was forced to try many cocktails over the weeks leading to the launch.

Notpla (formerly Ooho – the sound people allegedly made when they heard about the project) is a start-up that began its life at Imperial College, my old university. Rodrigo Garcia Gonzalez, co-CEO and -founder, was really nice and told me cool things about how they are playing with texture, colour and flavour in the capsule material. His accent is also way sexier than mine.

DrinkUp.London, which runs London Cocktail Week, the event that the project is part of, are a sister company of my employer. I have a pass and will hopefully be drinking cheap cocktails on at least one night this week. They are ten years old this year – well done Hannah and the team.

After the launch, I went down the pub and had a thoroughly excellent evening.