The Balvenie Stories Scotch single malt whisky collection, as we touched upon when it launched in June of last year, consists of expressions that are typically tied to stories of a particular person and his/her craft at this popular distillery. Three releases to date have been part of the core of this collection, and now they’ve been joined by a fourth that tells “a tale of exploration and craft, culminating in the first ever expression of The Balvenie made entirely from ingredients grown on its Dufftown estate.”

The new The Balvenie Stories The Edge of Burnhead whisky, according to those behind it, is a 19 year old single malt that is said to be “inspired by by the fragrant, heather-cloaked highlands which surround The Balvenie Distillery.” The Scotch is said to celebrate “celebrates the pastoral tale of how The Balvenie craftsmen experimented with the distillery’s natural resources to find the perfect match between fresh heather and barley.

“The expression, which is made from locally sourced ingredients found in the distillery grounds — home-grown barley malted at The Balvenie Maltings, water from the Convel hills, and fresh heather from Burnhead Wood — retains the familiar robust Balvenie taste.” 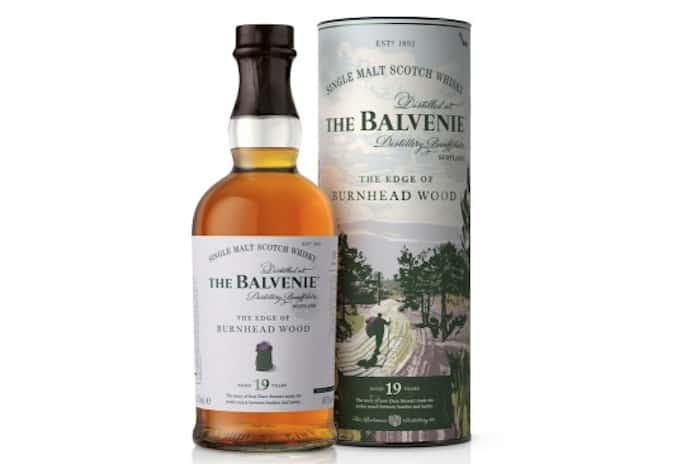 “Stories are the lifeblood of The Balvenie Distillery and are deeply embedded in all the work that we do,” said The Balvenie Malt Master David C. Stewart MBE, in a prepared statement. “The story behind The Edge of Burnhead Wood captures the majestic Speyside landscape and the inventive essence of The Balvenie’s loyal and determined craftspeople.

“In this way, The Edge of Burnhead Wood sums up the spirit of the work carried out at The Balvenie Distillery; The Balvenie remains true to the techniques and stories passed down by its craftsmen from generation to generation, while also looking forward by exploring new techniques, flavors and marriages to develop unique and original Balvenie expressions.”

As it was with the previous releases, drinkers can hear the story of this whisky via a specially recorded podcast featuring the craftsmen behind the expression. It is available online and can also be accessed by scanning a QR code on the bottle with a smart phone.

Plans call for The Edge of Burnhead whisky to be available globally starting this month, pricing at £260, or around $315 USD. It is bottled at 48.7% ABV and you’ll find some official tasting notes below.