Stirling Distillery co-founders Cameron and June McCann are switching gears from their tradition of singly producing gin next to the historic castle to adding in whisky distilling. Cameron has what’s described as a history of working in the whisky industry and running whisky shops in Stirling. The pair are now launching two single cask whiskies named after Stirlingshire distilleries which operated in the 18th and 19th century: Cashly and Arngibbon.

“We’re pleased and proud to be releasing whisky from The Castle Rock. What makes us especially excited about our Sons of Scotland range is the chance to start a new chapter in Stirling’s whisky history while celebrating Stirlingshire’s rich whisky making heritage,” Cameron said in a prepared statement. 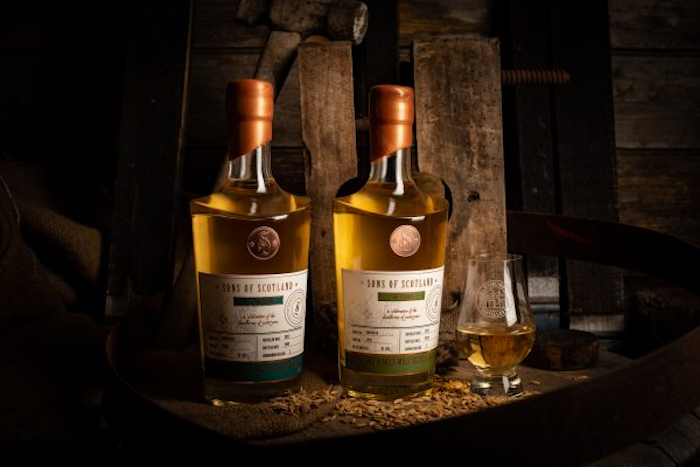 What’s known as the new Sons of Scotland range features four whiskies drawn from different regions of Scotland: the Highlands, Speyside, Lowlands and the Islands.  The Cashly single cask whisky is sourced from a Highlands distillery, while Arngibbon comes from Speyside — both matured in ex-bourbon hogsheads for 8 years.

Stirling Distillery’s whisky making plans for the future are to produce its own new-make spirit on site this year and release its first single malt in 2024. June is eager to get started on the distillery’s new project.

“As an independent business, we consider ourselves to be the luckiest people in the world to be able to do what we’re doing in one of the world’s most famous historic locations,” June noted. “The chance to share some delicious whisky with the local community, fans, and friends, as well as to contribute to Stirlingshire’s whisky heritage is a dream come true.”

The Cashly and Arngibbon whiskies are available on the Sterling Distillery website for £50 a bottle. You’ll find official tasting notes for both below.