Steve Lipp: The Man Behind Some Great Private Label Scotch

Tucked away in a home office in the hills of Calabasas, California, (where this time of year the temperatures are hot) was not exactly where I pictured the headquarters of Alexander Murray & Company, helmed by Scotsman Steve Lipp.

Born in Banff, Aberdeenshire, in the northeast of the country, Lipp was a self-described moderate achiever with a  report card to match: It always said “could do better,” said Lipp. He spent summers on his uncle’s farm, steeped in countryside, learning how to drive a tractor and taking nips from his uncle’s hip flask against his mother’s wishes.  Eventually, when the time came to decide between university and the oil fields, the good money and abundance of vacation on the rig were just too good for Lipp to pass up.

After two near-death experiences in the field, including having to ditch out of a helicopter over the North Sea, Lipp knew it was time for a change.  His brother-in-law’s father happened to be the distillery manager of the GlenDronach Distillery, inspiring Lipp to partner-up and invest his savings into a Scotch whisky company that would later serve as the model for what is today Alexander Murray.  They would buy Scotch from brokers and create their own brands. If you’re thinking, “Well, that sounds a lot like independent bottling,” it’s not. The difference, Lipp pointed out, is that they didn’t mention the distillery names on the bottlings.

Over the first ten years, Lipp traveled the world to expos, building a clientele with unique yet superb products. The advantage that Lipp had over the big importers was that he could change anything he didn’t like about his bottlings with much greater ease. 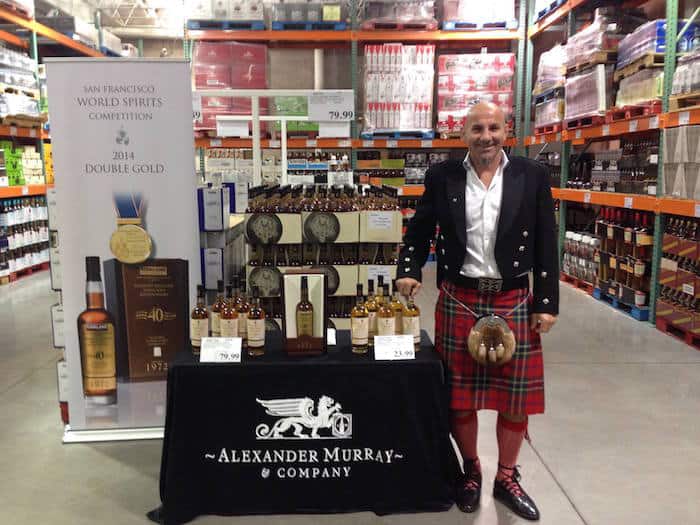 Steve Lipp has his private label Scotch at Costco. (image via Alexander Murray)

His business eventually led him to San Francisco, where he was looking for an importer in the United States. As fate would have it, he met an English lad at the bar who also used to play rugby, and they got along so famously that the Englishman eventually asked Lipp if he was interested in investing in a West Hollywood bar. Fast forward to 2007, and Lipp decided to trade in the dreary, albeit beautiful, Scottish countryside for palm trees and sunshine. “I landed in California and never looked back,” said Lipp.

But that wasn’t the only reason Lipp ended up in California. Before his move, back in 2004, he and his business partner decided to go their separate ways. As he searched for his own label name and continued to travel, he kept harkening back to his days on his favorite uncle’s farm. And so, Lipp decided, that brand would bear his name: Alexander Murray.

The label behind the private whisky brand

Inspired by his old rugby coach’s advice, “You make your own luck,” Lipp decided the best way to put his brand out in Southern California was obvious: put on a kilt and head down to the Chamber of Commerce. That very well may have been Lipp’s best idea, because a woman at the Chamber took notice and informed him that her friend was the whiskey buyer at a national supermarket chain. And thus began Lipp’s start in the U.S. private label business.

Lipp’s 13 year business relationship with that national supermarket chain isn’t the only way the man has changed the way we see and buy our booze.  In 2007 another giant retailer, Costco, wanted in on the private label game, and notably they selected Lipp to source and label their first Kirkland Signature Brand alcohol: a Single Malt Scotch. Lipp’s youngest client is Total Wine & More, a BevMo-style superstore that arguably offers a more personal shopping experience, with wine tastings and classes.

In awe of Lipp’s oral history, and the walls of every Scotch known to man surrounding me, I realized we hadn’t even touched on the Alexander Murray brand itself. Almost 13 years in, Lipp is working on his Batch 4 and selecting casks for Batch 5, and creating an 18-year-old version of his Monumental 30-year-old (his personal favorite blend, with the Kirkland Signature three-year-old surprisingly coming in second). Part of what makes the Monumental 30 and Alexander Murray’s blends so highly regarded is that Lipp follows the traditional style: making sure that 75% of the product is made up of malt, whereas modern blends seldom offer more than 25%.

In keeping with his trailblazing ways, Lipp also recently introduced Polly’s Casks, the first ever single malt Scotch to be finished in a cask that has previously aged beer. And not just any beer. Firestone Walker’s Double DBA casks were shipped to the Highlands of Scotland to help finish the maturation of Tullibardine Highland single malt.

I asked Lipp what his favorite single malt was, to which he replied by pulling down a bottle of Lagavulin 16 yo and regaling me with a story about how his uncle (double check) saw a fisherman fall off his boat and saved his life, to which the fisherman responded by gifting Lipp’s uncle a bottle of Lagavulin 16 yo each year for 25 years. When Lipp returned to help clean out his belongings, he found that every bottle had been saved (empty, of course) with a diary of all the dates they were given.

As if Lipp’s stories weren’t enough to chase the week’s doldrums away, he offered me a dram of the Alexander Murray Speyside Single Malt 41-year-old that had been staring at me on the coffee table our whole conversation. Finished in hand-selected sherry casks for 12 months, I was suddenly transported from the triple-digit valley heat to my grandmother’s kitchen around the holidays. “Don’t get too hung up in tasting notes,” Lipp warned as I sipped. “The taste should be about the type of mood you’re in, the setting…it affects your perception of the whiskey.”

Expect to see more of the unconventional from Lipp and Alexander Murray for years to come. He is filling a scotch void that no one even knew existed: “There’s 110 different single malt distilleries in Scotland – but you’ll only ever hear about a handful at the local bar. This brings the lesser known distilleries to America.” Well, Steve Lipp, for that, this country thanks you.