A unique cask Royal Lochnagar Scotch single malt whisky has been bottled as part of Diageo’s Casks of Distinction range and will be sold to help out the Scottish Ballet.

Laid down in 1994 at the instigation of Lord MacFarlane of Bearsden, who was at the time Chair of United Distillers and Vice Chair of Scottish Ballet, proceeds from the bottling are meant to invest in the future of Scotland’s national dance company. Scottish artist Norman Edgar was commissioned to paint the cask end to portray Scottish Ballet Principal dancer Nicci Theis in the role of Princess Aurora, the sleeping beauty.

Now, the highly collectible whisky is being awakened after 26 years, with 470 bottlings set to be auctioned off through Whisky Auctioneer. Every pound raised at the auction will be donated to the Scottish Ballet Endowment Fund. The first auction lot will include bottle number one and the cask end painting by Edgar depicting Princess Aurora. The first ten lots will also include exclusive behind-the-scenes experiences with Scottish Ballet. 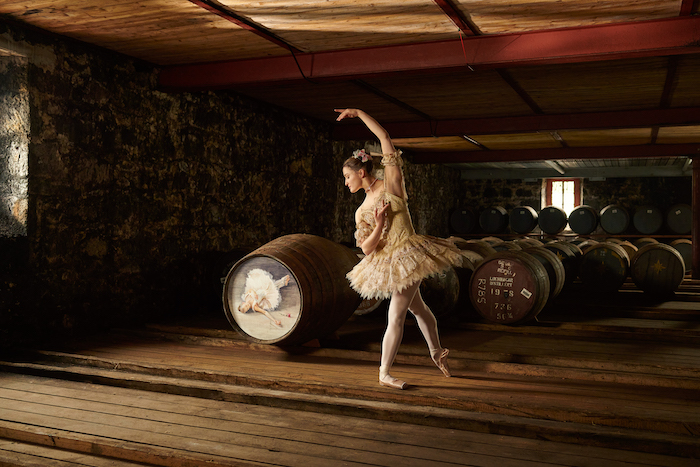 A unique cask Royal Lochnagar Scotch single malt whisky has been bottled as part of Diageo’s Casks of Distinction range and will be sold to help out the Scottish Ballet. (image via Diageo)

“It’s a privilege to support the Scottish Ballet Endowment Fund by hosting the online auction of this incredibly distinctive Royal Lochnagar release,” Head of Auction Content at Whisky Auctioneer Joe Wilson said in a prepared statement. “This whisky has a story to tell and an important cause to support, so we are sure that both whisky and ballet lovers, as well as collectors around the world, will be excited to have the opportunity to acquire such an interesting expression.”

The auction is set to take place from September 9th – 13th with all bottling and auction costs donated by Diageo and Whisky Auctioneer in support of Scottish Ballet.

“It is deeply gratifying that this Royal Lochnagar cask, which I presented to Scottish Ballet in celebration of its 25th anniversary in 1994, is now being awoken,” Lord MacFarlane said. “I am delighted that people will now be able to taste this extremely special whisky, but even more importantly the legacy of our donation will be continued through the funds the cask will raise for the Scottish Ballet Endowment Fund.”

Official tasting notes for this whisky are below.

‘The Sleeping Beauty’ is a single-cask Highland malt at 56.3% vol. The top notes are of dried fruits and kitchen spices, soon evolving into Christmas cake, plum pudding and mince pies on a bosky (bramble thicket) base.