The brand-new Smokehead ready-to-drinks launch to save people from the usual pre-mixed cocktails and offer an experimental smoky alternative to shake-up socialising, according to information from the company. Smokehead mixed with Cola is exactly as the name suggests, mixing together Smokehead Islay Single Malt Whisky with the bubbly taste of Cola.

“There is a long-standing debate whether a single malt should be mixed. But Smokehead is an unapologetically bold smoky whisky that is made to be enjoyed however you want it,” Smokehead Brand Director Iain Weir said in a prepared statement. “Smokehead refuses to follow the rules of conventional whisky drinking.” 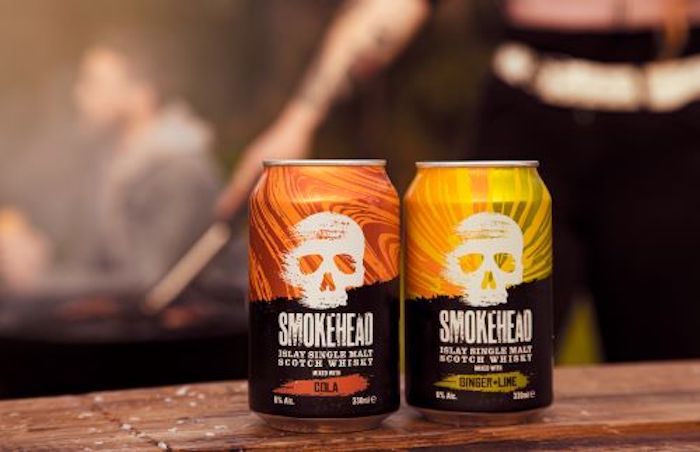 Smokehead in a can (image via Ian Macleod Distillers)

The whisky was established by Ian Macleod Distillers, noted as being one of Scotland’s leading independent, family-owned distillers, blenders and bottlers. Ian Macleod is the world’s 10th largest Scotch whisky company, producing and selling over 15 million bottles of spirits every year, and has built up an enviable portfolio of premium quality spirits, including  Glengoyne, Tamdhu, Rosebank and Smokehead Scotch whiskies and Edinburgh Gin. Smokehead’s current lineup includes Rum Rebel, Smokehead, High Voltage and Sherry Bomb, as well as the new canned single malts.

Both 330ml cans (6% ABV) are available for a retail price of £2.50 in the United Kingdom currently. For those unfamiliar with Smokehead, below is official information on each of their core releases.