Single Bottle Of Macallan Scotch Could Fetch Over $1.1 Million at Auction

Is a single bottle of whisky, regardless of the brand, worth over $1.1 million USD? It is a good question, and something that’s to be tested out soon at an upcoming Scotch auction in Scotland in early October. If previous sales in such a venue remain true, we could see a new world record set.

The bottle in question is The Macallan Valerio Adami 1926, a 60 year old whisky that’s one of only 24 of its kind made. It is going up for auction through auction house Bonhams in Edinburgh, Scotland, where is is expected to fetch somewhere between £700,000-900,000, or upwards of $1.148 million USD. If the gavel drops at that price, it will set a new record for the most ever paid for a single bottle at public auction. The previous record, ironically, was set by one of its siblings just earlier this year in Hong Kong, where it was auctioned off for a cool $1.014 million USD. 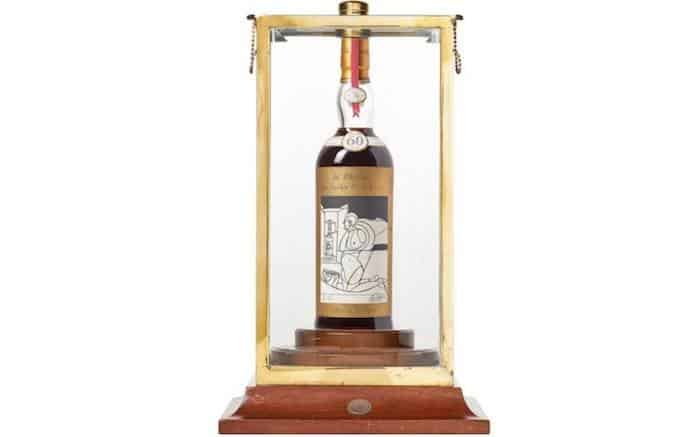 “The Macallan 1926 60 year old has been described as the Holy Grail of whisky,” said Bonhams Whisky specialist in Edinburgh Martin Green in a prepared statement. “Its exceptional rarity and quality puts it in a league of its own, and the world’s most serious whisky collectors will wait patiently for many years for a bottle to come onto the market. It is a great honor to be offering this amazingly rare whisky at our Edinburgh sale.”

For those unfamiliar with this Scotch, it was bottled in 1986. Macallan commissioned two world-famous Pop Artists – Valerio Adami and Peter Blake – to design labels for a very limited edition of 24 bottles –12 of the Adami and 12 of the Blake labels. The bottle is presented in a specially commissioned cabinet or Tantalus, based on the traditional ‘Brass and Glass’ distillery spirit safe. It was bought by the vendor direct from the Macallan distillery for an undisclosed sum in 1994.

Although a dozen bottles of The Macallan Valerio Adami 1926 were produced, it is not known how many of them still exist. One is said to have been destroyed in an earthquake in Japan in 2011, and it is believed that at least one of them has been opened and consumed.