Benriach Distillery, located in Scotland’s Speyside region, will soon open the doors to its first-ever official visitor center following the completion of a major investment project. The distillery’s new center will feature a bar, tasting lounge and retail space, and open to visitors on May 21st.

Initially offering a variety of flavor-focused tastings following the easing of Scotland’s COVID-19 restrictions, visitors will be able to explore Benriach’s multi-layered single malt heritage dating back to 1898. The project follows the recent unveiling of Benriach’s new single malt portfolio and marks the first phase of distillery renovations as part of an investment initiative by Brown-Forman, who acquired the distillery in 2016.

The new visitor center will offer a “Sense of Flavor” tasting, which will delve into the production process at Benriach, then feature the distillery’s classic and smoky expressions at 10 and 12 years old. A “deconstructed cask tasting” will also be offered for those who wish to dive deeper into the distillery’s history of eclectic cask maturation. The “Barrels, Butts and Barriques” experience will offer visitors the chance to taste five individual cask types, culminating in a tasting of the Benriach 21-year-old. 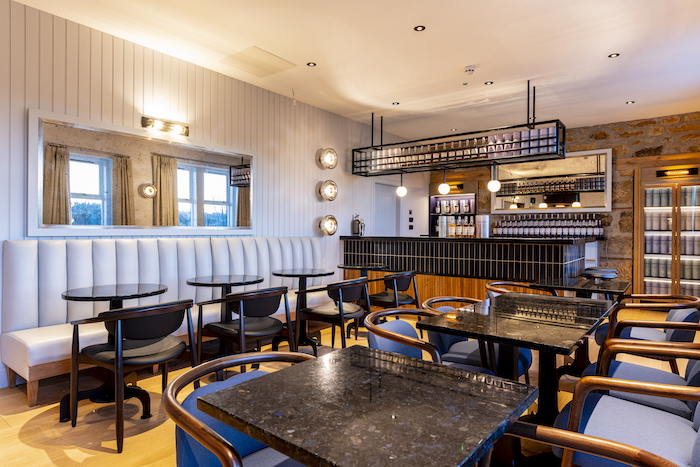 Part of the new Benriach visitor’s center (image via Benriach)

Visitors are required to pre-book their preferred tasting online before attending the distillery, which will open initially on a weekly basis from Friday through Sunday, 10:30 a.m. to 5 p.m. Distillery tours of the production site will return when it is safe to do so.

Its design rooted in tradition with a nod to the future, the new visitor center was built using natural materials from local suppliers when possible and drew from the natural color palette of Speyside to inspire its interior. External to the visitor building, one of the distillery’s most prominent warehouses has been whitewashed and branded to cement Benriach’s new identity … a practice traditionally adopted by ancient distilleries in Scotland.

“The last year has been significant in Benriach’s journey with the launch of the distillery’s new flavor forward portfolio, so the unveiling of our first-ever visitor center is a special moment,” said Jennifer Proctor, Visitor Center manager at Benriach in a prepared statement. “From cask tastings to cocktails, we’ll initially be offering two flight-style tasting experiences that allow customers to explore Benriach’s flavor spectrum. When restrictions allow, we will reveal our full distillery tour offering and announce the next phase of the distillery visitor center development. Whether a local to Speyside or a visitor from afar, we look forward to welcoming guests to discover Benriach’s world of flavor.”

Benriach dates back to 1898, when founder John Duff built his distillery. It stands on the site of the old Riach farm in north Speyside, drawing water from a mineral-rich aquifer, deep beneath the distillery. It continues today with a tradition of distilling three styles of whisky; classic unpeated, Highland peated, and triple distilled, together with what’s described by the brand as an eclectic selection of casks from around the world.

108
Shares
806
Views
Share on FacebookShare on TwitterGet Our Newsletter
Cheers to the Dads! Personalize a bottle of his favorite whiskey to create a modern gift for the modern man. Use code: FATHERSDAY20 for $20 off your next order of $100 or more at ReserveBar