Royal Salute recently added a new and quite rare Scotch whisky to its Time Series collection, The 51 Year Old.

Not only is it one of the oldest blends Royal Salute has ever made, but it’s one of their most exclusive with only 101 decanters of the new expression coming to market.

The Time Series debuted two years ago with the release of a 52-year-old. The whisky makers say this series focuses on the symbolic power of numbers and that in the world of whisky, any age statement over 50 is powerful enough to garner attention. 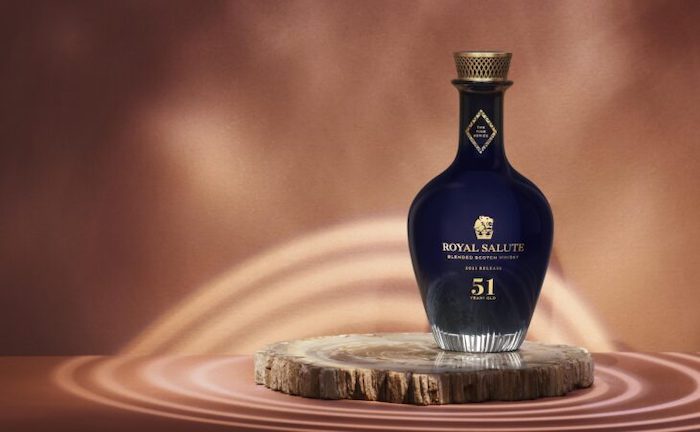 And although this expression is a year younger than the debut blend, Royal Salute blenders say avid collectors will notice the 51 Year Old is rarer (as the 52 Year Old was limited to 106 decanters, five more).

Royal Salute’s master blender, Sandy Hyslop, used some of the oldest casks available to him and as Royal Salute is owned by Chivas Brothers, Hyslop had access to stocks from some of Scotland’s finest distilleries.

Strathisla, Longmore and Glen Keith – all notable Speyside distilleries – feature in the 51 Year Old. And collectors will take note of the inclusion of ghost distillery Caperdonich in this expression, of which only a finite amount of stock remains.

Hyslop said in a prepared statement, “The Royal Salute Time Series 51 Year Old is an undeniably special expression that blends exceptional style with high-aged whisky. Crafting a Scotch of that age requires intense care and attention to ensure the cask characteristics are perfectly absorbed without being overpowering, and the moment I tested the final blend will stay with me forever; the masterful role that time has played over a minimum of five decades of slow maturation really blew me away. This release is a one-of-a-kind expression.”

While the number of distilleries in the blend is not disclosed, the whisky’s floral and fruity flavor profile suggests Speyside forms the backbone. Bottled at a cask strength of 45.4% and non-chill filtered, the 51 Year Old has a freshness that is rarely experienced in a whisky of this age.

The finish is long and highly evolving. As with most whisky of this age, this is one to spend at least an hour. Time in the glass allows a more indulgent sweetness to shine through, akin to creme caramel and honey. A supremely complex liquid.