Diageo’s Royal Lochnager distillery has a long history associated with the British royal family. Situated on the edge of the Family’s Balmoral estate in Scotland, it first came attention to the Crown in 1848, “when Queen Victoria and Prince Albert visited John Begg’s distillery – on what is claimed to be the world’s first distillery tour – and awarded him a royal warrant just a few weeks later.” It is, these days, a favorite of Prince Charles, who recently visited there to check on a special cask the distillery had set aside for him.

The cask in question, according to those behind it, “was originally a gift to His Royal Highness to mark the 140th anniversary of the first royal visit” to the distillery back in 1848. The whisky for this release was originally laid down in 1988 by Royal Lochnager into an American oak hogshead cask, and was then handed over to Charles when he dropped by in October. 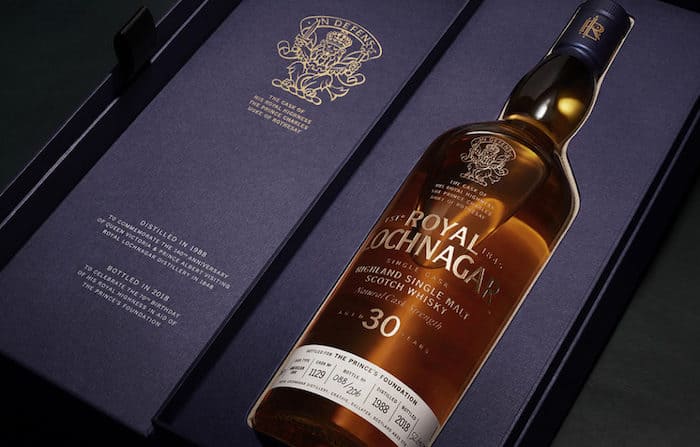 Plans now call for the 1988 Royal Lochnager Single Malt Scotch Whisky, aged 30 years, to see its 206 individually numbered bottles be distributed as follows: 184 bottles will be available through The Whisky Exchange ballot (an online Scotch whisky retailer that will host the ballot December 31 through January 27), one will be auctioned once the ballot is closed, one placed in the Diageo Archive, and the remaining 20 retained by The Prince’s Foundation for further fundraising.  The bottles in the ballot will be priced at £1,470 (around $1,900 USD) and the full proceeds will go to The Prince’s Foundation.

“We are delighted to have welcomed His Royal Highness back to Royal Lochnagar Distillery recently and are particularly pleased that this special whisky will support the work of The Prince’s Foundation at The Carriage at Ballater Station on Royal Deeside,” said Royal Lochnagar distillery manager Sean Phillips in a prepared statement, “which is so important to Royal Lochnagar and our people who live and work here.”

Limited official tasting notes for this 52.6% ABV whisky indicate “there are cereal, vanilla, pear and marzipan notes on the nose.  The palate is creamy with a delicate sweetness, blackcurrant, walnut and coconut flavours.”