The Royal Lochnagar Single Malt Scotch Whisky Aged 17 Years 175th Anniversary is matured in refill and Pedro Ximinez and Oloroso seasoned casks and bottled at 56% ABV. Only 3000 bottles will be available, pricing at £250 (around $335 USD). 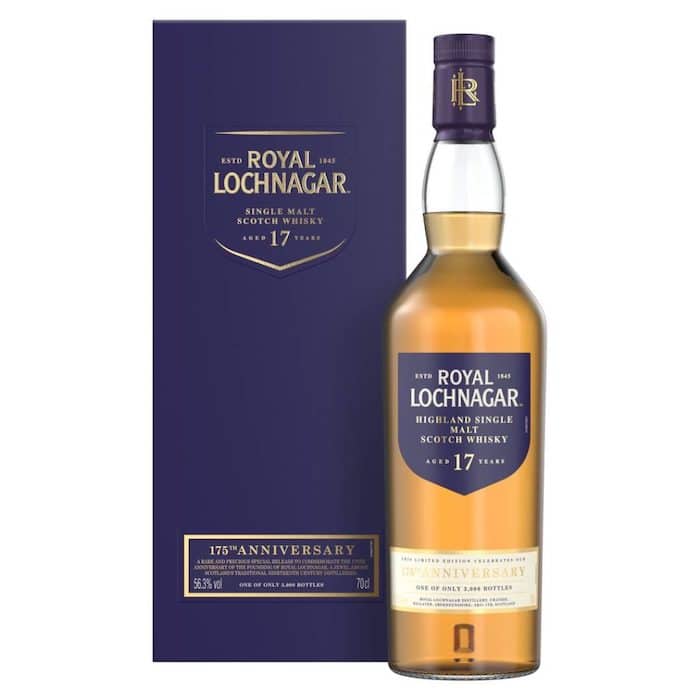 “We are pleased to celebrate our 175th anniversary with a rare limited-edition bottling,” said Sean Phillips, Distillery Manager at Royal Lochnager, in a prepared statement. “Selected by our expert team, this rare release portrays true Royal Lochnager character and celebrates its history as a tiny jewel among Scotland’s traditional 19th-century distilleries. A special and exclusive treat for the whisky connoisseur.”

Official tasting notes indicate the whisky “opens with fruity notes of mango and melon, alongside hints of wood, bracken and brambles, obtained through a mixture of short and long fermentation. On the palate, there is an immediate smooth sweetness combined with juicy acidity.

“Chocolate and light coffee characters emerge after a few moments, giving a long, dry and elegant finishing with a touch of sandalwood.”

Royal Lochnagar, for those unfamiliar with it, was founded in 1845 and is located one mile from the Royal Family’s Balmoral Castle at the end of the Cairngorm mountains. It was originally named New Lochnagar and renamed after Queen Victoria and Prince Albert took the distillery tour and issued a Royal Warrant that granted them the use of Royal in its name.

The distillery uses a combination of slow and long fermentation, slow distillation and worm tubs. It has a production capacity of 450,000 liters, making it one of the smallest distilleries out of Diageo, and uses as its water source the “crystal clear water” of Scarnock Springs.

15
Shares
2.1k
Views
Share on FacebookShare on TwitterGet Our Newsletter
Read More Whiskey News
Whisky Review: The GlenDronach Port Wood
Cheers to the Dads! Personalize a bottle of his favorite whiskey to create a modern gift for the modern man. Use code: FATHERSDAY20 for $20 off your next order of $100 or more at ReserveBar