Researchers at Edinburgh’s Heriot-Watt University have identified a drought-resistance gene in barley, part of a Scotch Whisky Association-funded effort to “future-proof” the scotch industry.

The result of the nearly five-year study, published in the Journal of Plant Physiology and Biochemistry, was the demonstration that a gene known as HvMYB1, which controls stress tolerance in cereal crops, helps plants survive drought conditions. Scientists found that barley plants with more prominent expression of this gene were better able to survive drought conditions in the lab.

According to Peter Morris, who led the study, genetic research into drought tolerance is crucial for the scotch industry in a warming climate. “Drought is already impacting yields with the European cereals harvest hit particularly hard in 2018. A prolonged, dry and hot summer significantly impacted yields and quality,” he said in a prepared statement from the university. “As climate change gathers pace and we experience more extreme seasons, it is essential we can maintain continuity of supply.

“This is significant for key industries like Scotch whisky, one of the UK’s leading export items.” 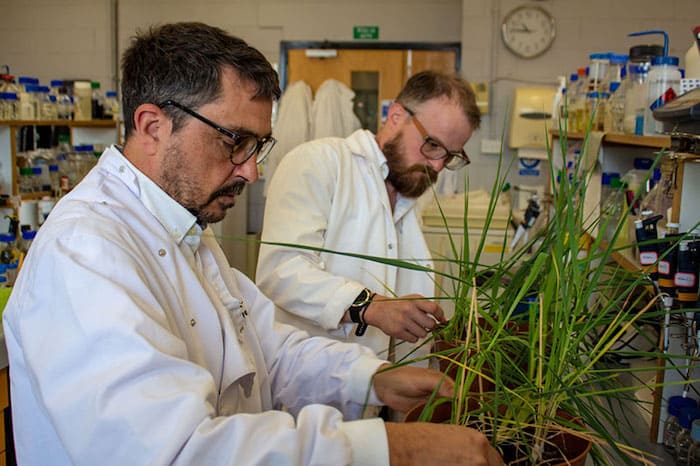 Identifying the gene was quite a challenge, as interestingly, barley has over 39,000 genes, which is almost double the length of the human genome. The HvMYB1 gene is also present in other grains, including wheat, corn, and rice, meaning this discovery could have wider impacts in the grain business.

“Genetic variation is essential in plant breeding for resilience so we expect this research will now be used by plant breeders as a marker for drought resistance,” added Morris. “It will help focus attention on different barley varieties in which this gene is naturally expressed more prominently. This may lead to greater variation in the gene pool of crop plants and more drought resistant crops in future years.”

Approximately 90% of the barley used in scotch whisky is sourced from Scotland, according to Dagmar Droogsma, director of industry at the Scotch Whisky Association. “The SWA works closely with specialists at Heriot-Watt university, and others in the sector, to ensure that the industry is equipped to adapt to any changes that may arise from a changing climate,” he said. “We therefore welcome this research which helps to provide resilience against the effects of climate change and to sustain the diversity of barley varieties used for Scotch Whisky.”

Grain is a significant business in the UK, with the overall value of the barley industry at £957 million in 2018. The Scottish whisky industry itself is worth £5 billion.

23
Shares
251
Views
Share on FacebookShare on TwitterGet Our Newsletter
Get The Glenlivet 18 Year Old at ReserveBar. Shop now!