I have been assigned to review water.

Well, that is not entirely accurate. What I have been assigned is a set of whiskies representative of the Highland, Islay, and Speyside regions housed in a quite clinical-looking box with three pipettes and a letter in an envelope. Accompanying this, I also have three bottles of water. The waters are from Uisge Source, and each has been sourced from private springs in the regions corresponding with the samples provided in the box. In a nutshell, I have a bottle of water from the Highland region, a bottle from Islay, and bottle from Speyside sitting in front of me.

If I am being completely honest, which I certainly hope to be, I entered this project with loads of skepticism. I have long held to the belief that however one chooses to enjoy their own spirits is what is right for them, so long as it is responsibly and within reason. As for myself, I virtually always prefer my whisky neat. This is just my own personal preference. I am not here to dictate the “right” and “wrong” way to enjoy a dram. That being said, I have also learned to appreciate a dash of water on occasion. Sometimes water’s impact on whisky may bring out some more subtle layers in the palate or nose. Other times it can serve to make a particularly harsh cask-strength offering more palatable. What I have admittedly not done is compare waters themselves. 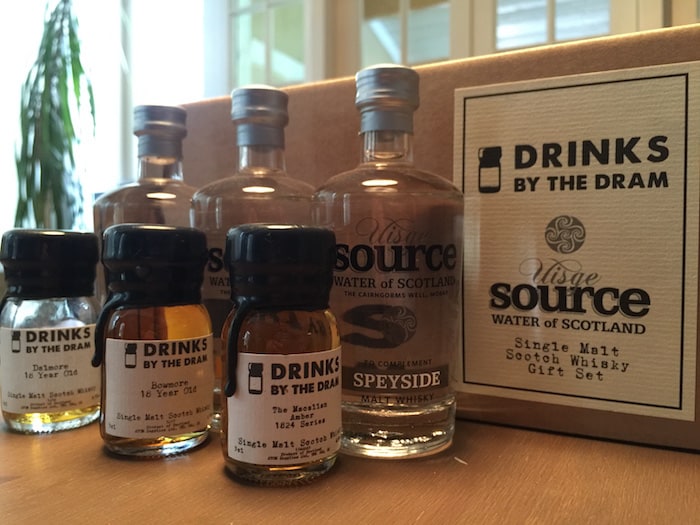 My experience prior to this has been relegated to water in two and only two variables; either present or absent. For the purposes of this comparison, I have taken samples of each whisky and divided them into 5 equal parts. Each part is housed in an identical Glencairn glass, which is my preferred glass for reviewing. The first glass would be the Scotch straight with no water at all. The next set of four glasses would be arranged on a piece of paper labeled with each region; Highland, Islay, Speyside, and a fourth for my local tap water from Portland, Oregon. Each dram would receive one third of a pipette of water from the corresponding region. I allowed each to sit and began sampling.

As I mentioned previously, my skepticism was rather high entering the process. The whiskies included in this set were an 18 Year Old from The Dalmore representing the Highlands, Bowmore 18 Year Old representing Islay, and The Macallan Amber 1824 Series representing Speyside. I did have to make a substitution in the case of The Dalmore. In what I can only assume to be an error in the packaging process, my wax-sealed sample bottle was only filled to just under a quarter of the 3cl volume. This did not leave me nearly enough whisky to be able to add water to without completely drowning it in more than one serving, so I left that bottle sealed and grabbed a previously opened Glenmorangie Original 10-year-old Highland single malt to stand in its place. Let it not be said that I failed to adapt and overcome this most insurmountable of obstacles in the name of bringing you this article.

In my initial sitting, I chose to begin with Islay. I set my table with each sample before me and attempted to generate what exactly I would write about in order to stretch this into a proper article. Surely, I would be merely reiterating the same information for each sample of Bowmore cut with water compared to the straight sample and that would be it.

How wrong I was.

The Bowmore sample provided had an appearance which is best described as caramel in color with strong legs. The nose was decently peaty, though was nowhere neat smoky enough to set off any alarms in my home. There were loads of bitter citrus rind in the nose along with cinnamon-spiced apple, and a hint of sourdough toast with butter. On the palate, I found the dram to have a slight burn on the front end with an easy transition into a fruity mid-palate. There were notes of caramel, pie crust, baked pear, raisin, and wisps of smoke laced throughout. It is a very approachable Islay. The finish was slightly bitter with notes of clover honey and lingering peat. While not a formal tasting for a review, I rather liked it.

First on my sheet in regards to sampled with water was the Highland region. I noted instantly that the nose was brighter, but more muted and delicate. There was less peat. On the palate, there was more spice, specifically cracked black pepper. The finish was very soft.

Onto Islay for more of the same, I assumed. Upon bringing the glass to my nose, I realized I had been mistaken. The difference was striking. The nose was more dusty whereas the Highland was bright. There was more of a caramel sweetness to the aroma. The palate was more rounded and full. The cracked black pepper was nowhere to be found, though there were new notes of tobacco and marmalade. I couldn’t help but smile.

The sample with water from Speyside provided yet another experience. On the nose, there was a strong note of black licorice candy that had not been there previously. The palate was more muted, similarly to the Highland. This sample had strong vanilla notes throughout the palate and finish.

Portland is known, among a great deal of other things, for its great-tasting tap water. I have lived in many places around the world, and Portland does indeed have great tasting water straight from the tap. In whisky, however, it is a disaster. My tap water absolutely killed the nose and the palate for Bowmore. 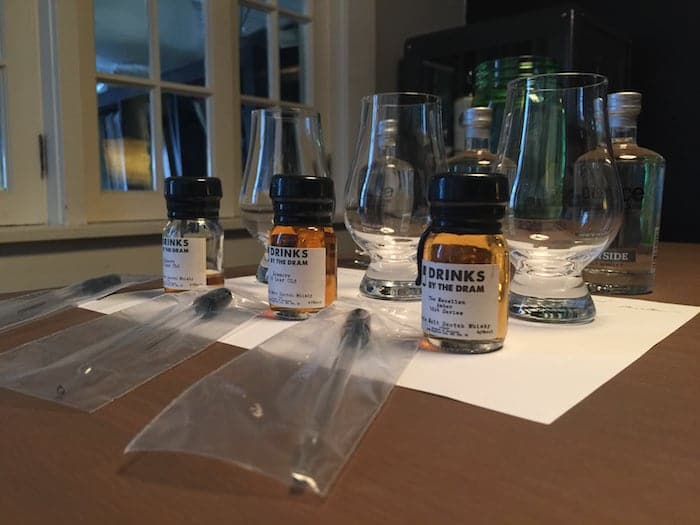 The Macallan Amber 1824 Series has a soft amber appearance with medium legs. The nose was almost like a hot toddy with notes of ginger, lemon, honey, and vanilla mingling with old books and dark stained antique wood furniture. There is a surprising amount going on. On the palate, I found the mouthfeel to be thin. There are strong spice notes with baking chocolate, cinnamon, nutmeg, spiced fruitcake, along with fig cookies and dates. The finish is quick and wood-heavy. I found it to be a bit heavy-handed – a loud thud of a finish.

Cut with Highland water, the Macallan surrenders large amounts of lemon and other strong citrus notes. There is more oak coming through. The palate is softer. A lot of the nuance and flavors are quickly drowned. When combined with water from Islay, the Macallan became more oaky. A somewhat similar nose as with the Highland, but more bitter. The palate brings forward citrus rind. Speyside gave up the softest nose of the three regional samples, reminiscent of lemon cookies. The palate became sweeter with flavors of shortbread cookies and vanilla cream. After mingling with local tap water, there was once again more oak and vanilla on the nose. This was the most bitter and sharp version. The flavors became muted and more medicinal. There were malt notes, but the overall presentation became chemical and unpleasant.

The Original Glenmorangie 10 year has an appliance of very light straw with medium legs. The nose provides ample vanilla combined with cereal grains, disinfectant, and wet straw. The palate is sweet, soft, and straightforward. There are flavors of nougat, caramel, pineapple, and light oak. The finish is loaded with toffee with a medium burn and lingering nougat.

Combined with water from the Highlands, Glenmorangie becomes brighter, as did the previous two samples. There is a lemon zest throughout the nose and the palate that sings right through the finish. Islay tends to bring a sense of complexity to the drag, making it less fruity and bringing out a very slight amount of salt that was otherwise absent entirely. It is pretty interesting, though it is toned down significantly. The sample mixed with Speyside took the opposite route, with much more brightness throughout the nose, palate, and finish. There is a sweet lemon hard candy taste that becomes almost overwhelming, particularly in comparison to the other versions. The local water turned the dram into soap. That is honestly the best and most succinct way to describe it. The nose became flowery, but seemed artificially so. The palate has a flavor of flowers and apricot. The finish is quite flowery and herbal, like potpourri.

While still sitting in front of my notes and glasses during each tasting, I was quite simply astounded. I was absolutely laughing out loud out of the sheer joy of being proven so wrong. Each region’s water’s impact on whisky was indeed dramatic and individual. In hindsight, this should not have been as big a surprise as it was. After all, basically each element, ingredient, environmental factor, and step in spirit production has a very tangible impact on the final product. Why should water be immune to this? A ridiculous oversight on my part, I admit.

Now, I stand before you amused and more than a little humbled. The experience of combining regionally-sourced water with complimentary whiskies was far more illuminating than I had anticipated.  Following the full tastings, I sampled each water on its own. While there were subtle differences, I cannot say that I was able to definitively note the characteristics they would ultimately impart on each drink. It would be very interesting to test the pH and mineral content of each water in an attempt to zero in on what makes each so different from the others.

That being said, while I enjoyed the process and will look forward to demonstrating this effect to others, I still prefer my whisky with the water on the side.