The recent royal wedding of Prince Harry and Meghan Markle was an expensive affair, there is no doubt. It is said, for example, the cake alone cost £50,000, or about $67,000 USD. Scotch whisky brand Royal Salute, owned by Chivas Brothers (Pernod Ricard), wanted to make sure they had something to match the price tag of the affair it seems, debuting a limited edition whisky that’s priced at $10,000 USD.

The Royal Salute Royal Wedding Edition, according to those behind it, was crafted by the brand’s master blender Sandy Hyslop, who brought together some of the oldest and rarest whiskies from the Royal Salute collection into this unique blend. It isn’t mentioned what these are, but what is known is the blend is fully matured in 100% American oak casks, which is a first for Royal Salute. 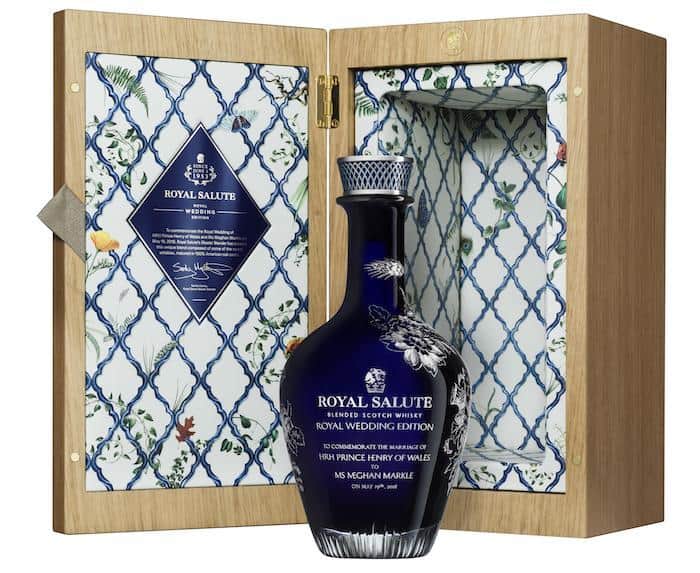 This commemorative blended Scotch whisky is housed in a Darlington Crystal decanter engraved with a unique number and displayed in a hand-crafted American oak box. The decanter is further enhanced with images of roses, thistles and barley, while the inside of the box is adorned with flowers and foliage in a “subtle nod to Harry and Meghan’s spring nuptials. Images of vivid daffodils celebrate Harry’s title as Prince Henry of Wales and California poppies feature in tribute to Meghan’s birth place of Los Angeles.”

“It was a pleasure to create such a special whisky for HRH Prince Harry and Ms Meghan Markle,” said Hyslop in a prepared statement. “By marrying together some of the oldest and rarest whiskies in our portfolio, and aging them in American Oak casks, I have created a harmonious blend to match the coming together of such an iconic couple.”

Royal Salute Royal Wedding Edition, as previously mentioned, is pricing around $10,000 USD for one of the just 70 bottles which have been released. You’ll find official tasting notes for it below for your consideration.

The Royal Salute Royal Wedding Edition presents an incredibly sweet nose with notes of luxurious vanilla ice cream and soft chocolate fudge, followed by mandarin orange and a dusting of spicy cinnamon. Whisky aficionados fortunate enough to sample this stunning blend will discover a rich, fruity, and incredibly well-balanced taste, with flavours of ripe tropical banana and juicy charred pineapple. The luscious syrupy texture rolls into a hint of almonds and indulgent dark chocolate ginger sweets. Its distinctive flavour is complemented by an incredibly long and sweet finish with creamy vanilla in abundance.