Last Drop Distillers has made a name for itself in recent years in whisky collector circles as a brand capable of bringing to market small batch releases of rare spirits, be it whisk(e)y or whatever else. Their acquisition by Sazerac some years back seems not to have fazed their mission at all, and now the latest fruit of their sourcing labors are a pair of Scotch single malt whisky casks laid down by the Glenrothes distillery back in 1969.

The Last Drop 1969 Glenrothes Single Malt Scotch Whisky, according to those behind it, was put into barrel back in October, 1969, at the Glenrothes distillery in Scotland’s Speyside region. Of the various casks that were laid down in that era, two ex-bourbon casks were to end up remaining undisturbed in an aging warehouse for the next half century before being “discovered” and bottled up this year. The two casks in question, #16203 and #16207, yielded just 130 and 141 bottlings, respectively, for a total of just 271 bottles being released worldwide. It is the second in an exclusive trilogy Last Drop is offering up that’s tied to older whisky from this distillery. 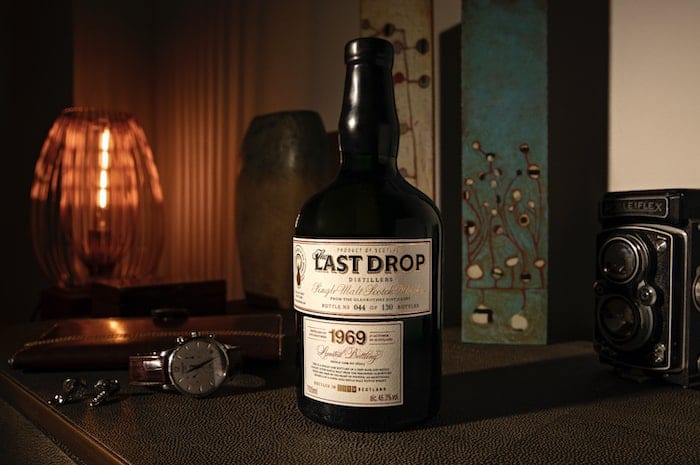 “We are delighted with the second of our trilogy of old Glenrothes single malts,” said the Last Drop Distillers team in a prepared statement. “Only a very fortunate few will have the chance to sample these exceptional spirits, which are wonderful examples of fine distilling from the 1960s. Each sip transports you back to the heady days of flower power, when revolution was in the air, and on the radio. We commend to all those who truly appreciate the scent and taste of a magnificent old Scotch from a bygone era. You will not be disappointed.”

Plans call for a boxed set for each bottle, holding not just the full size expression itself but also a signature 50ml miniature replica and pocket sized, leather bound tasting book with additional pages for your personal tasting notes. Each set is pricing at $6,250. It should be noted that, despite being sibling casks, there are said to be “similar aromatic profiles, but Cask no. 16203 appears drier and less fruity, with snuffed candle at the base, whereas Cask no. 16207 has a smooth texture, with a sweet and sour taste and a long, warming finish.”