One Hell Of A $4.8 Million Whisky Collection Is Coming To Auction At Sotheby’s

In the often wild world of whisk(e)y auctions bidding occurs that can drop bottles into record price territory. Often though these bottles are sold against the backdrop of a larger auction, such as being mixed in with wine and other spirits. Not so the case though with an upcoming auction at Sotheby’s, in which a single owner collection is coming to market from a private “cellar,” with an estimated worth in the range of £4 million ($4.8 million).

What’s being dubbed The Ultimate Whisky Collection, according to behind it, will showcase what’s described as “the most comprehensive range of desirable Scotch whisky” ever to come for sale under such conditions. Though the name of the collector was not revealed, it is said by Sotheby’s that he had “always remained fascinated by each and every expression of Scotch whisky and though he acquired and enjoyed a wide range, he naturally established several favorites along the way.

“Whiskies from Bowmore, Highland Park and especially The Macallan captured his heart and top bottles from these distilleries became his focus. During his pursuit, the collector met and developed a relationship with U.S. based whisky specialist Jonathan Read who has played an important role in developing this collection. Together, they sought to identify and complete important verticals as well as delve into the vast world of Scotch whiskies bottled decades ago.” 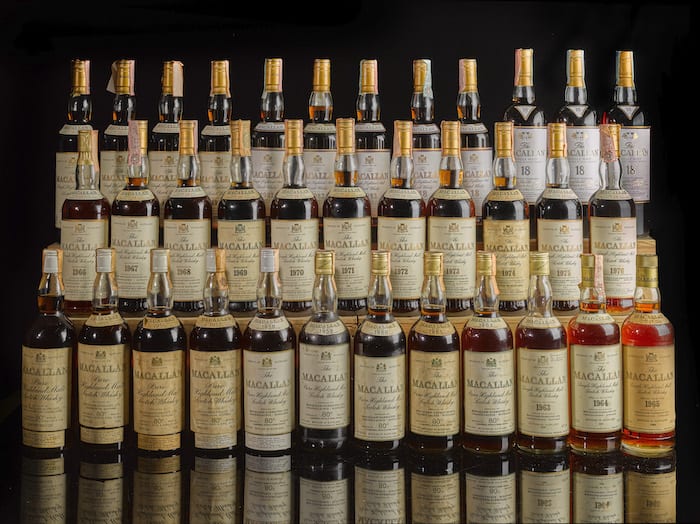 The Macallan 18 Year Old Vertical – 44 bottles in total,vto be offered in individual lots and two smaller verticals (image via Sotheby’s)

“The Ultimate Whisky Collection comprises what is undoubtedly the most comprehensive catalogue of whisky ever to be offered by a single owner in a single auction,” said Jonny Fowle, Sotheby’s Spirits Specialist, in a prepared statement. “Not only is it a joy to be able to present some of the most sought-after bottlings such as The Macallan 1926 60 years old and the Springbank 1919 50 year old, as well as such rarities as bottle number 1 of the Bowmore 54 year old (of which only 12 were released), above all it is extraordinary to see amongst these iconic bottlings so many expressions that have received the highest critic scores over the years, particularly the Samaroli bottlings of Bowmore and Laphroaig, the Macallan Red Ribbons and all of the Black Bowmores.

“Whilst collecting whisky can appeal to different people in different ways, it is clear that this collector is a true fan of the liquid within the bottles as well as the bottles themselves. Ultimately it is the enjoyment and appreciation of whisky that has made this collection what it is.”

“Collecting whisky over these past twenty years has been a real passion of mine,” added the unnamed collector, “though it was not something I set out to do. I have always loved drinking whisky – as family and friends will attest, to this day I can be found most evenings with a cigar in one hand and a glass in the other – but I was a wine collector first. I then found myself looking at unique bottles of Scotch, initially attracted by the beauty of the labels. So I started this collection and realized that if I really spent time on it and was selective in my choices, I might be able to put together something significant and unique.

“Two decades on, I think the collection is at that point where it is indeed unique. Having cherished these bottles, I am now ready to share them with collectors around the world. I hope they find good homes in the hands of whisky lovers who will enjoy the experience as much as I did, both the drinking of them and the sense of history that each of these bottles brings.” 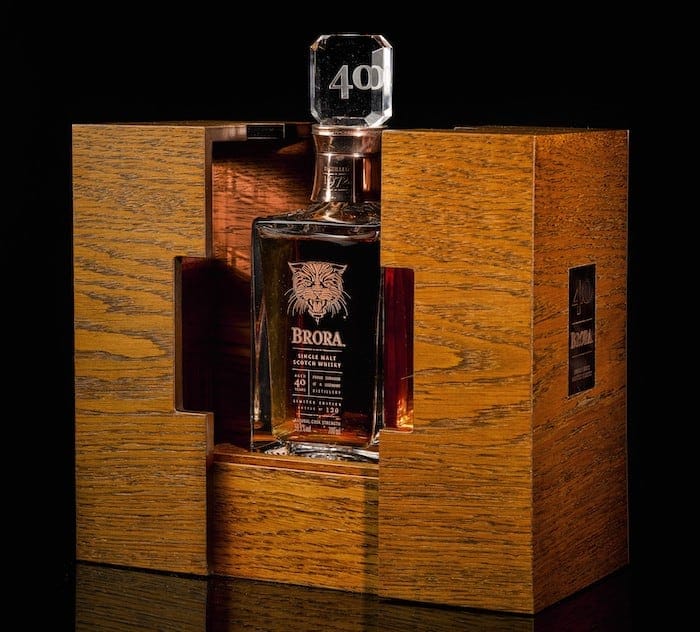 The sale will open for online bidding on September 27 and culminate in a live auction on October 24 at the Olympia event space in West Kensington, London, alongside RM Sotheby’s sale of collectible motor cars on the same day. As for the specifics of the collection itself, here is the entire lot of it as spelled out by the auction house.

The Ultimate Whisky Collection is defined by its strong representation of The Macallan bottlings. Comprising half of the lots in the sale and with a combined estimated value in excess of £2.2 million, this is the most comprehensive collection of the Macallan Fine and Rare series ever offered at auction.

Most notable is the 178 bottle-strong collection of Fine and Rare spanning seven decades, from 1926 through to 1991. The outstanding line-up is headed by the originally-labelled 60 years old The Macallan 1926 from cask #263. Cask 263 yielded only 40 bottles, considered the ‘holy grail’ of whiskies; 12 bottles were labelled by Peter Blake, 12 by Valerio Adami, and two bottles were sold individually and given private labels, one of which was hand-painted by Irish artist Michael Dillon. The remaining 14 were bottled as the anchor for the Fine and Rare series and labelled as such, making them the oldest bottles in the iconic ‘Fine and Rare’ series, both by age and by vintage. In the last two years, three versions containing liquid from Cask 263 have all broken records at auction, but the fourth bottling from this cask has not been seen at auction for over a decade. The Macallan 60 Years Old, Fine & Rare Series is the only bottle required to complete both the full collections of bottlings from cask 263 and the Fine and Rare vertical, a series to which The Macallan is continuing to add releases annually. 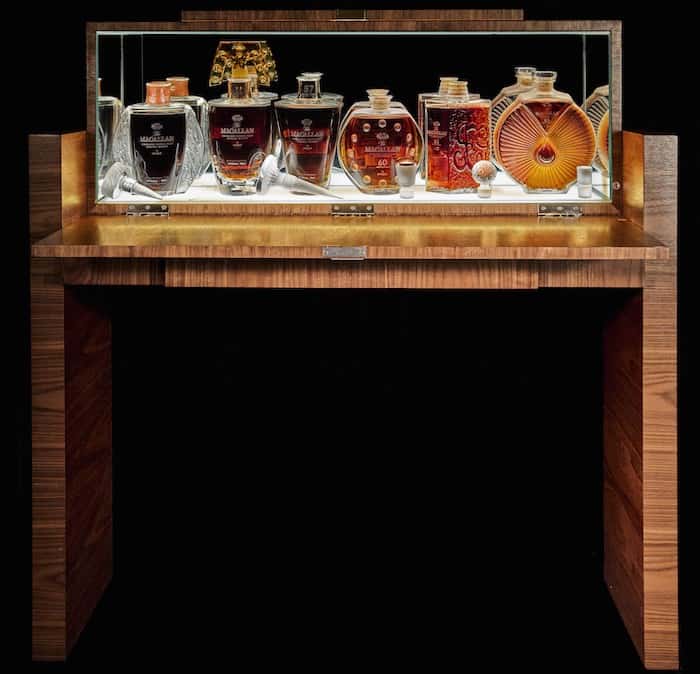 On behalf of the Ultimate Whisky Collector, Sotheby’s commissioned two bespoke, hand-made cabinets designed by British craftsman James Laycock to perfectly fit each of the two complete Macallan in Lalique Six Pillars Collections in the sale. These stunning decanters will be housed within a lockable compartment of two floor-standing walnut cabinets with a fitted mirror interior and their etched glass bases with polished edges illuminated by LED systems upon which the bottles sit. One is French polished, while the other is black lacquered; both would make truly special additions to any whisky aficionado’s collection.

A rare collection of Macallan Fine and Rare Miniature bottles will be offered in an exclusively commissioned lockable wall-mounted cabinet, also designed by James Laycock. French polished Burr oak doors open to reveal a fitted mahogany and walnut interior with 46 identical compartments within which these bottles, ranging from 1937 to 1991, are displayed. These 46 bottles represent the complete collection of miniatures in the Fine and Rare series as the series existed when the Ultimate Whisky Collector stopped collecting them in 2018, and, by the time of their sale, will be only two miniatures short of complete if considering the two bottles that have since been released. 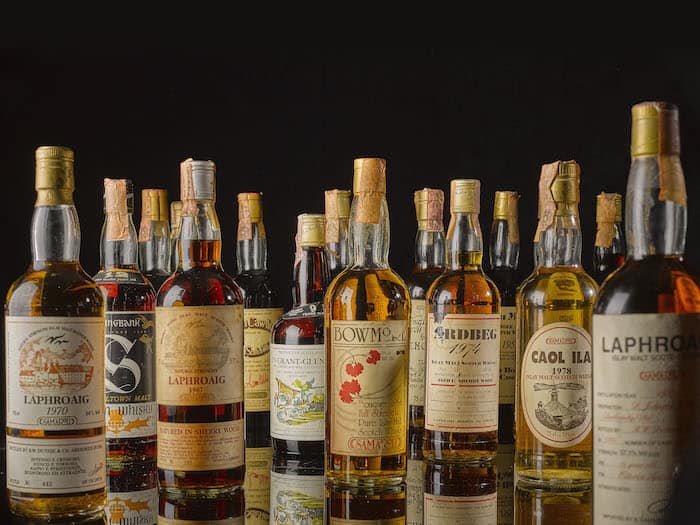 20 lots from legendary Independent bottler Silvano Samaroli, including the Bowmore Bouquet and Laphroaig 1967 (image via Sotheby’s)

Gordon & Macphail, based in Elgin, are pioneers of independent bottling in the Speyside region, buying Single Malt from local distilleries and releasing their own expressions under the G&M label. Of these legendary releases, this sale features the Mortlach and Glenlivet 70 year old Generations series, The Macallan Queen’s Mother’s 80thBirthday, and a range of Glen Grant, Linkwood and Macallan Speymalt vintages.

Of all Scotch’s independent bottlers, none have made more of an impact on collectors than Silvano Samaroli. Samaroli’s iconic releases, including Bowmore 18 year Bouquet, Laphroaig 15 year old Sherry Cask 1967, Laphroaig 1970, Springbank 12 year old and Ardbeg Sherry Wood 1974, will be offered as part of the Ultimate Whisky Collection.

The smoky style of Islay’s whiskies has shown remarkable growth in recent years. Of all Islay’s distilleries, Bowmore holds the lion’s share of collectible bottlings, boasted in this sale by the inclusion of all the Bowmore Black releases (First, Second, Final and Bowmore Black 50 year old Last Cask) as well as Bowmore Black, Bowmore White and Bowmore Gold from the Bowmore Trilogy series, all of which were distilled in 1964. The Bowmore collection continues with the 1957 54 year old “Crashing Waves” and the 50 year old releases from both 1961 and 1966.

Other Islay bottlings include an entire vertical of Port Ellen’s Annual Releases (1st- 17th) to be sold as individual bottles, the Limited Edition 40 year old Bunnahabhain, and the 40 year old Ardbeg 1965, presented in a display case alongside a 5cl miniature bottle. 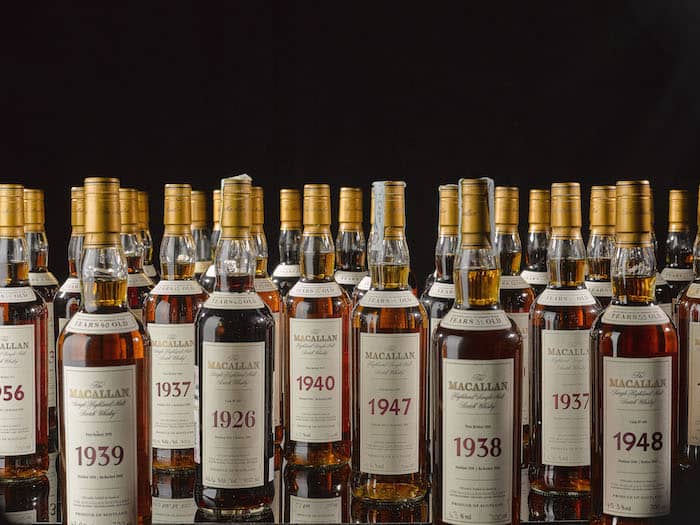 The Macallan, Fine & Rare collection to be offered in 109 lots (image via Sotheby’s)

Highland Park’s 50 year old designed by Edinburgh-born jeweler, Maeve Gillies, will be offered alongside other notable Highland Park lots such as the Orcadian Vintage Series releases from 1964, 1968, 1970, 1971 and 1976.

In addition to an unrivalled offering of iconic bottlings, the Ultimate Whisky Collection will also present some of the finest casks available for sale, each selected and tasted by Jonny Fowle, Sotheby’s Spirits Specialist. Amongst these are such peated rarities as both Bowmore and Laphroaig casks from 1995, and Bruichladdich’s Octomore, distilled in 2012. Further highlights include barrels and Hogsheads from legendary distilleries such as Dalmore, Bunnahabhain and Clynelish, the Highland Park First Fill Oloroso Sherry Cask and Springbank First Fill Oloroso Sherry Cask. Each cask will be listed in the catalogue with recent regauging information and tasting notes.

285
Shares
4.9k
Views
Share on FacebookShare on TwitterGet Our Newsletter
Read More Whiskey News
A Famous Painting Of Whisky Sold For Over $1.2 Million Recently
Cheers to the Dads! Personalize a bottle of his favorite whiskey to create a modern gift for the modern man. Use code: FATHERSDAY20 for $20 off your next order of $100 or more at ReserveBar