The idea that one can take a whisk(e)y and pair it with about anything to form a lifestyle product is something luxury shoe brand Oliver Sweeney has done with spirits giant Diageo before. Back in 2014 the two teamed up to tie the latter’s Johnnie Walker label into a pair of special shoes with a special heel to hold a small bottle of Red Label. Now they are back together again under Talisker, another Diageo Scotch offering, with a very limited edition and expensive set of boots.

The Oliver Sweeney x Talisker Whisky Boots, according to those behind them, are hiking boots which are hand crafted from fine Italian leather in the family owned factories of Le Marche. Where the whisky angle comes in is that sewn onto each left boot is a uniquely positioned pocket to hold a 2oz etched stainless steel hip flask. Also part of the distillery influence is that the boots’ soles feature a section of cask used in aging the accompanying whisky. 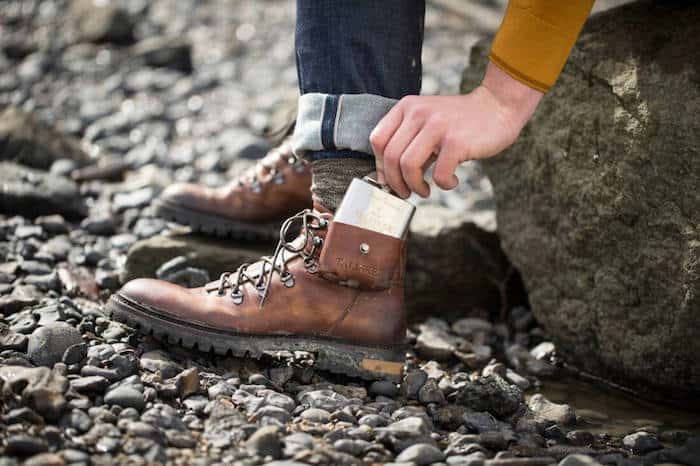 Speaking of the accompanying whisky, the boots come as part of a larger gift set which includes a bottle of garden variety Talisker 10-Year-Old (only available to those in the EU or UK apparently though). The shoes, whisky bottle and flask all come in a solid oak box.

“Talisker is one of my favourite single malts, so this has been a real passion project for me,” said Tim Cooper of Oliver Sweeney in a prepared statement. “I wanted to create a design which reflected our shared passions for craftsmanship and innovation. And the ‘Made By the Sea’ boot is just that – it evokes a spirit of adventure resonant of the rugged landscape of the Isle of Skye.”

The Oliver Sweeney x Talisker Whisky Boots, limited to just 200 pairs, price around £595, or about $775 USD. The set initially came out for Father’s Day, and it looks as if they still have some left. The right boot, by the way, comes with a tiny compass in it as well.