Oban: The Story of A Unique Highland Scotch Whisky

The Oban distillery is one of the oldest in Scotland, dating back to 1794. It sits at the head of a broad U-shaped bay that shares its name. Its very name in Scotch Gaelic, An t-Oban, means “little bay.” The distillery sits in the center of the town of Oban, making it one of the few urban distilleries in Scotland, and the only one on a town’s main thoroughfare. It is one of less than a dozen functioning distilleries in Scotland that can document their history back to the 18th century.

Stylistically, its whisky is at the seam between the Islands and the Western Highlands. It’s very lightly peated, with a slight briny character, combining the typical West Highland fruitiness, sweet and floral heather notes with elements of the dry smoky style of the islands. The result is a distinctive, lightly smoky, malty, dry whisky that is Oban’s signature.

There are a number of interesting features about whisky distillation at Oban.

First of all, the operation itself is quite small. There are only two stills, a wash still and a spirit still. The wash still has a capacity of 11,000 liters; charged to 95 percent. The spirit still is 7,200 liters in capacity; charged at about 88 percent. The total output is about 660,000 liters of pure alcohol, making it the second smallest Diageo distillery in Scotland. Of Diageo’s 30-odd distilleries, only Royal Lochnagar is smaller.

The stills are onion or lantern shaped, with wide conical necks. The spirit still is actually quite small. According to Donald Colville, Diageo Global Scotch Whisky Ambassador, the stills are run “incredibly softly, gently even, to encourage as much contact with the copper as possible.” The combination of wide necks and slow distillation maximizes reflux. A significant “lamp glass” constriction at the base of the necks also encourages reflux. The stills are similar in design to the classic Speyside still.

The distillery uses a combination of both peated and unpeated malt, sourced from Diageo’s central malting facility. In the 19th century, Oban was often unpeated. It became progressively so during the early 20th century, although it remained lightly peated by the standard of Island whiskies. In recent decades, the distillery has been reducing its overall peating levels by increasing the proportion of unpeated malt that it uses in its mash tuns. According to Donald Colville, current peating levels are approximately 2/3 ppm and the new make spirit is about 1/2 ppm.

Fermentation is an unusually long 65 hours. According to Colville, historically Oban used a combination of one long ferment of 120 hours and one short ferment of 65 hours. Currently, however, it does only the short, 65-hour ferment. While this may be considered short by Oban’s historical practices, it is still at the upper range of the typical Scotch industry fermentation lengths.

Oban uses a traditional worm tub as a condenser rather than the modern tube and shell condenser. In a worm tub, there is only a single spiraled copper tube through which the vapor passes. The tube or worm is immersed in a water bath. Distilleries that use worm tubs generally produce whiskies that are often described as having meaty notes, although the intensity of these aromas can vary quite dramatically between distilleries.

There are only 14 distilleries in Scotland that still use worm tubs. The effect of the worm tub’s reduced copper contact can be adjusted by running the worm tubs “hot.” The hotter the temperature of the water they are immersed in, the longer it takes for the spirit to condense, thus prolonging the copper contact. An unintended consequence of “hot” worm tubs is that it also prolongs the distillation. Oban runs their worm tubs “hot,” usually 113 to 122 degrees Fahrenheit (45-50 degrees Celsius).

Oban’s worm tubs also have another unique feature; they contain two worms nested within one another. The vapor emerging from the lynn arm is divided into the two worms. The only reason for doing so is to further slowdown the condensation and maximize contact with the copper tubing. The result is that the meaty notes typical of worm tub condensed whiskies are less noticeable, although still present in Oban. According to Colville, it’s not clear when Oban began using two nested worms. 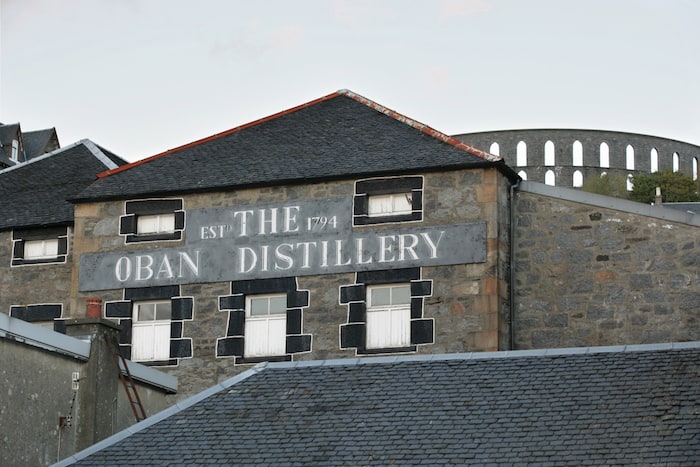 Unlike many other Scottish distilleries, Oban’s expressions are relatively limited. The core range consists of a 14 YO 43% ABV and a 43% ABV Distillers Edition. The Distiller’s Edition is the 14 YO expression that is additionally double matured by finishing in a Montilla fino cask.

According to Colville, the specific length of time in the Montilla casks varies and is ultimately dependent on when the master blender considers the whisky ready. The Distiller’s Edition bottling does not carry a specific age statement, but they do carry the year of distillation and are typically about 15 years old.

Oban has also released an 18 YO and a rare 32 YO. Only 6,000 bottles of the 32 YO were released. It currently retails for about $1,900, although surprisingly it is often a lot cheaper at auction. Limited Editions cask strength 20 YO and 21 YO whiskies have also been released.

The Oban Little Bay is a non-age-statement expression released in 2014. Originally a travel retail exclusive, it is now moving into the core range. Little Bay is a blend of whiskies drawn from a combination of sherry casks, ex-bourbon hogsheads and ex-bourbon refill casks that have had new oak ends added. The blend is allowed to marry in smaller, American standard barrels of 180-190 liter casks before being bottled.

Oban has sold its whisky as a single malt longer than just about any Scottish distillery. During the first half of the 20th century, however, its whisky often appeared in blends from Dewar, Buchanan and White Horse. Per Colville, Oban is still used in small quantities in some of Diageo’s blended Scotch whiskies.

Oban may also have been one of the first distilleries to bottle private label whisky. McKercher’s, an Oban grocery store, sold Oban whisky under the Glenforsa brand name. The odd bottle of Glenforsa from the 19th century turns up from time-to-time at auctions. It’s been described as soft and fragrant, with pronounced floral and heather aromas. Further evidence that in those days Oban may have been unpeated.

In 1988, United Distillers launched the classic malt range, picking six whiskies that epitomized the style of Scotland’s whisky producing regions. Oban was selected as an example of a West Highlands malt. Although this concept was largely driven by marketing considerations, it did underscore Oban’s unique style as a meld of the West Highland and Island styles.

Oban is an outstanding malt whisky with a signature style that combines the best features of whiskies of the western Highlands and the Islands. For Scotch whisky enthusiasts, its long history adds an additional element of enjoyment. Slàinte.

174
Shares
1.8k
Views
Share on FacebookShare on TwitterGet Our Newsletter
Get The Macallan® Rare Cask at ReserveBar. Shop now!