Nick Offerman and Lagavulin Single Malt Scotch put a whisky-inspired spin on ‘Paint & Pour’ nights with their latest installment from the “Lagavulin: My Tales of Whisky” series.

In the duo’s latest holiday spot, Dram & Draw, Offerman jests with the paint n’ sip genre of art by breaking out his easel and a bottle of Lagavulin to embrace the fine art of whisky. It’s their version of the iconic Yule Log scene.

The new video spot features Offerman at his weekly art class with fellow amateur painters, where he persuades the class to ditch the long stems in favor of his favorite drink, a dram of Lagavulin 16 Year Old. 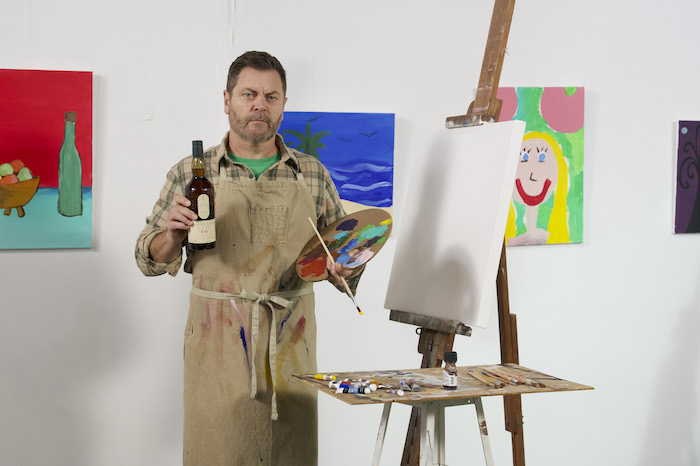 Nick Offerman jests with the paint n’ sip phenomenon by breaking out his easel and a bottle of Lagavulin to embrace the fine art of whisky. (image via Diageo)

This simple swap unlocks a higher plane of artistic audacity for the class. Offerman’s own painting is a retrospective self-portrait that revisits a fireside scene from the Holiday 2015 Yule Log video as an homage to the longstanding partnership between Nick Offerman and Lagavulin.

“I had no idea what an incredible painter I was until I wielded my brushes with the warm support of my favorite dram,” Offerman said in a prepared statement.

Lagavulin will follow up the Dram & Draw video with a second piece of holiday content starring Offerman, to debut on the live-streaming service Twitch. Dram & Draw Part 2 will air during a live experience on Dec. 8th from 6-8 p.m. EST during the Crown Channel’s Wednesday Fight Night Show.

Check out the ‘Lagavulin: My Tales of Whisky’ YouTube channel to watch this season’s new chapter (or view it above) and the complete series, including the 10-hour version of the Yule Log video.

For more information on Lagavulin Islay Single Malt Scotch Whisky and its distillery, log on to www.malts.com/en-row/distilleries/lagavulin.