To celebrate the 60th anniversary of the Jaguar E-type, the legendary car company is joining forces with The Glenturret, the oldest working distillery in Scotland, for a new whisky release: The Glenturret E-type 60th Anniversary Single Malt Scotch Whisky.

“It has a complex nose, sweet and oily with dark fruits, dried ginger and clean oak,” said Bob Dalgarno, The Glenturret’s master blender, in a prepared statement. “Toffee apple and caramel coat layers of fruit with syrup and sweet spice. Wood spices quickly accelerate on the palate then brake suddenly. Darker fruits pull forward, licorice sweeps in and sweetness flows throughout. Maturing oak intertwined with wood spice is last to arrive bringing a sweet, spicy, and warming finish.” 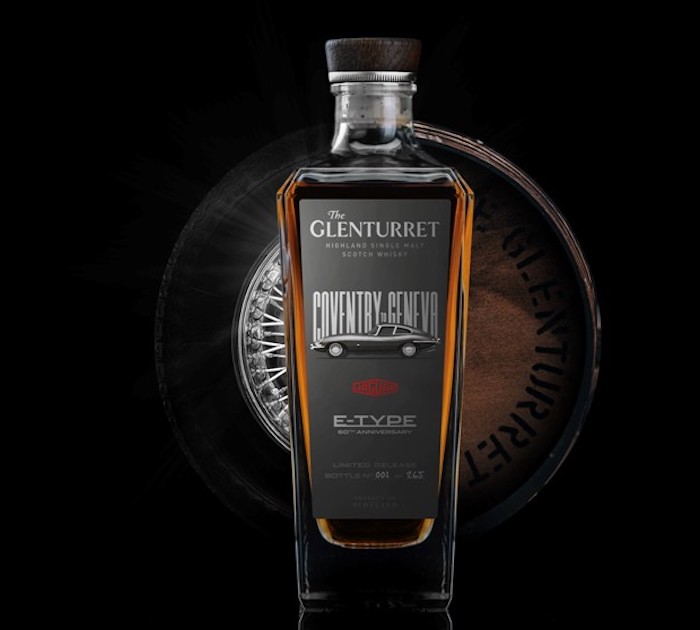 To pay homage to the Jaguar E-type, each bottle is branded with a label that references the historic overnight journey that test driver Norman Dewis undertook, cruising from Coventry, England to the 1961 Geneva Motor Show in Switzerland.

As well, in tribute to the car’s 265 horsepower engine, only 265 bottles of The Glenturret E-type 60th Anniversary Single Malt Scotch Whisky will be produced. Each bottle of this whisky is packaged in a custom wooden box that also includes a bespoke book and key ring. Bottles are available now at an SRP of £1,500 (about $2,100 USD).

This collaboration is just the most recent team-up for The Glenturret. Earlier this year, the distillery announced a partnership with French glassmakers Lalique on a limited expression, The Provenance, that was released in a crystal decanter designed by Lalique’s creative and artistic director Marc Larminaux. It is the first edition in The Glenturret’s new Trinity series.