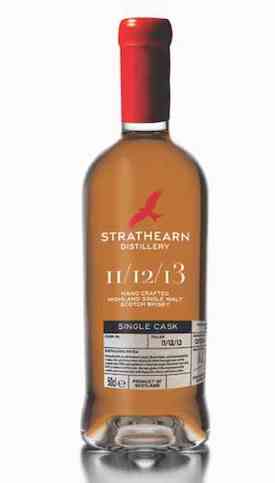 The rise of craft whisk(e)y, whether here in the US, or abroad, is something which helps to fuel the continued growth and development of the global market. Craft plays out even in venerable old Scotland where a handful of young distilleries such as Wolfburn are just old enough now to legally have their spirits called whisky. Another new player which recently entered the market, Strathearn Distillery, has released its first offering, with the first 100 bottles of it apparently doing quite well at an auction.

The Strathearn Distillery recently saw its first bottlings fetch some quite hefty prices from consumers and others ready to pay a high premium to own some of Scotland’s newest whisky. Information from the distillery indicates bottle 001, for example, sold for a very impressive £4,150, or a little over $5,100 USD. Even the lowest priced to sell was £315, or close to $400 USD.

“This has been an amazing event, far exceeding my wildest dreams,” said Tony Reeman-Clark, founder of Strathearn, about the auction in a prepared statement. “This has proved to me that Strathearn’s friends are all around the world and all I can say is thank you!”

As you are likely don’t know much about Strathearn, it is based in Perthshire and considered to be one of Scotland’s smallest distilleries since its founding in 2013. Its whisky is said by the distillery to be “matured in small octave size (50 litre) casks to give the whisky a traditional and distinctive flavour. By using either peated or non-peated malt and varying the type of cask between sherry, rum or bourbon, each batch of whisky will be entirely unique.”

Shares
213
Views
Share on FacebookShare on TwitterGet Our Newsletter
Read More Whiskey News
Scotch Distilleries To Get Some Power Via Green Hydrogen Hub
Get Jefferson's Ocean at ReserveBar. Shop now!