If you’re looking for an introduction to single cask whiskies, The Scotch Malt Whisky Society recently launched a new tasting kit that could fit the bill.

The Scotch Malt Whisky Society is among the world’s leading clubs for whisky lovers. Since its inception in Edinburgh, Scotland in 1983, the Society has been on a mission, according to them, to uncover the finest single malt whisky in the world through both online and in-person tasting events across America, hosted by its team of whisky experts.

Every month, the Society releases a new selection of at least 20 single cask whiskies, hand-picked by its tasting panel in Scotland for being what they feel is the finest whisky available. Society members then have the opportunity to order these whiskies through the website, taste them and share their own discoveries with fellow members through guided virtual tastings on YouTube and Facebook. 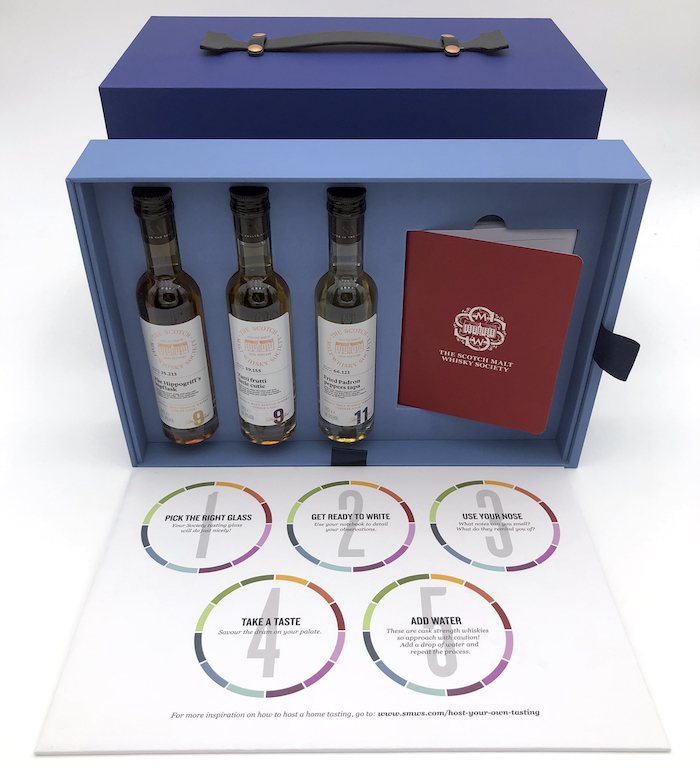 And with this new tasting kit, the Society shows off whisky’s diverse spectrum of styles, regions and flavors, presented in a bespoke box.

The kit includes three different 100ml single cask whisky bottles, two tasting snifter glasses, one glass water pitcher, a notebook and one water dropper. Most importantly, the kit includes a one-year Scotch Malt Whisky Society membership. It’s priced at $195. If ordered separately, the membership is $99, and the tasting kit is $145. You can order it here.

Members of The Scotch Malt Whisky Society see the benefits of access to a coveted selection of rare single malt whisky released each month (at least 20 new hand-picked selections each month); virtual and in-person tasting events throughout the United States; and private members’ rooms in the UK as well as US bars serving Society whisky.