Global movement OurWhisky on International Women’s Day is calling upon whisky makers to improve the representation of women in their communications after a study of the world’s leading whisky brands’ Instagram accounts found posts featuring men outnumber women by 228%.

The Women and Whisky: Female Representation in Social Media Marketing report has been conducted by OurWhisky, a platform championing diversity and equal representation in the whisky industry. The report highlights a disparity between the number of women and men being represented in social media marketing.

In 2020 the world’s leading whisky brands posted 3,896 images featuring men, and 1,707 including women. 23 brands posted in celebration of International Women’s Day, yet throughout the year women accounted for just 39% of people represented in those brands’ feeds, with male representation at 78%. 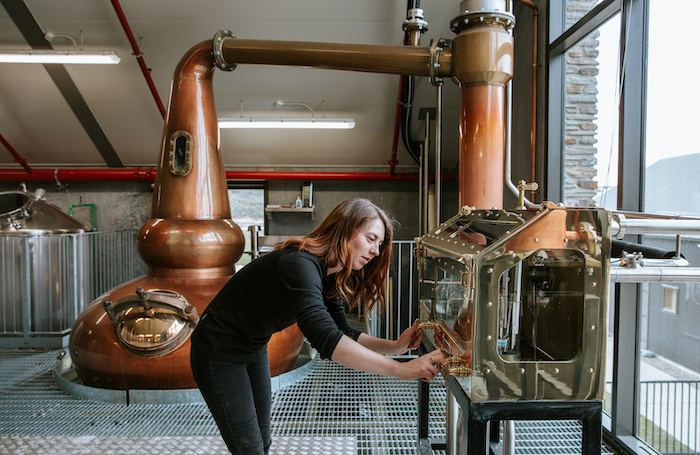 Isla Sherrington of the Cardona Distillery (image via OurWhisky)

Becky Paskin, co-founder of OurWhisky, says: “Many brands will no doubt be marking International Women’s Day by highlighting some of the incredible women in our industry. Celebrating female achievements is a wonderful thing, but to really honour these women and make whisky truly inclusive, we’re asking brands to consider how their year-round marketing is representative of today’s drinkers.”

The report analysed the Instagram accounts of the world’s 150 largest and most influential whisky brands, noting how many posts featured people, and the frequency of men, women or people of colour being depicted. The study found women account for just 36% of people represented in 2020, although it showed that overall female representation has seen a small increase of 4.7% since 2016.

According to market research firm Kantar, British women are enjoying 15% more whisky than in 2010, and now account for over a third of whisky drinkers*.

Becky comments: “In the last five years we’ve seen a welcome rise of female representation in whisky marketing, however this study demonstrates we’re still far away from achieving gender equality.”

Adding: “Whisky brands have the power to normalise the fact women make and drink whisky by what they choose to show in their advertising and marketing. They don’t need to feminise their brands, but by simply being more inclusive they can change the narrative and appeal to a wider demographic of potential customers, which has obvious business benefits as well.”

In terms of regional categories, Canadian whisky posted the highest representation of women in 2020 (42%), although only three Canadian brands were analysed for this report.

Canada was closely followed by Scotch – a marginal difference of 0.12% for a much larger category represented by 37 brands. However, just 16 Scotch whisky accounts posted above the overall industry average (36%).

For this report, the New World whisky category comprises 33 brands from non-traditional whisky-making countries such as Australia, England, Taiwan, France and Sweden. Collectively, they have a high level of representation of women (37%), led, in part, by female-owned brands and those with women on their distilling teams.

The study also analysed the representation of people of colour in whisky brands’ Instagram accounts. In 2020 non-white ethnicities were represented in just 17.9% of posts that featured people, an increase of 5.3% on 2016. The greatest representation was found in the accounts of whiskies made in Asia and India, and certain Scotch whiskies with large South American and Indian followings. People of colour accounted for 14.8% in posts made by brands outside of India, Japan, Mexico, South Africa, Taiwan. In those markets, 71% of people depicted are of non-white ethnicity.