Laphroaig has announced a 25-year-old expression celebrating the life of Bessie Williamson, “the first female distillery manager to own and run a Scotch whisky distillery in the 20th century,” according to a prepared statement from those behind it.

Williamson was a native Glaswegian who took a summer job at Laphroaig straight out of college in 1932. She ended up staying on after the summer was over, eventually winding up in charge of US distribution after owner Ian Hunter had a stroke in 1938. By World War II, she was the distillery manager, making her the most senior woman in the whole scotch industry.

Williamson was “among the first to anticipate the coming trend for single malt scotches and to position the Laphroaig whiskies, and by extension other Islay malts, to the American market,” according to the company. She became the Scotch Whisky Association’s American spokesperson in 1961, touring the nation promoting Islay whiskies. 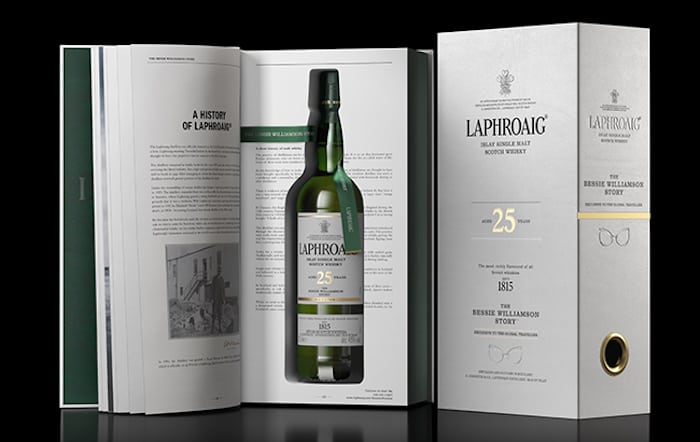 “Laphroaig is a globally recognised whisky thanks to Bessie,” said distillery manager John Campbell. “It is well documented that Bessie was universally loved and respected by her colleagues at Laphroaig and the people of Islay. It is this aspect that we celebrate with this whisky, remembering her as a true icon of Laphroaig.”

As for the whisky itself, Laphroaig 25 Year Old The Bessie Williamson Story is a single malt aged in “refill American oak hogsheads and refill barrels.” The distillery’s official tasting notes are below:

Nose: Peaty with spicy and floral notes. Sweeter notes of pear drops, green apples and bonbons that add to a sweet malty backcloth.

Finish: Warming and long lasting with floral and coastal notes.

It’s available now, exclusively on the travel retail market, at a price of £410 (around $530 USD). It comes in a bespoke book safe whose pages include Williamson’s story, as well as tasting notes and a message from Campbell.