Scotch single malt whisky, like many other whisk(e)y styles on the global stage, has ranges of flavors that can appeal to the desires of different palates. One distillery that knows how to play well into this is Glenmorangie out of Scotland, and for one of its latest releases it has unveiled a limited edition, almost dessert like expression that is said to have flavors of “honey, white chocolate and fruit,” among others.

The new Glenmorangie A Tale of Cake, according to those behind it, came about as a result of Dr. Bill Lumsden, the brand’s Director of Whisky Creation, considering his best memories involving cake and what kind of whisky might go well with that dessert type. To that end he crafted an expression that finished Scotch whisky in Tokaji dessert wine casks. More specifically, it was noted that “Tokaji wines are highly prized dessert wines from the Hungarian region of Tokaj, created using noble-rot grapes. Noble rot fungus (Botrytis cinerea) grows in moist conditions, making grapes shrivel up and concentrating their sugars, to create unique flavors. 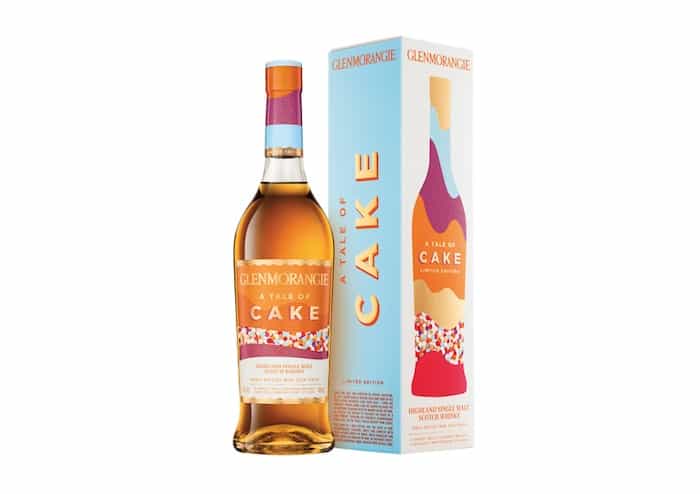 “Many years ago, Dr. Bill Lumsden, who is fascinated by wine, became intrigued by the cult status of Tokaji wines, with their sweet and distinctively honeyed notes. Sourcing a few casks, he began experimenting, and discovered the extraordinarily mellow tastes they could bring to Glenmorangie. Inspired by those early experiments, he revisited Royal Tokaji casks for Glenmorangie A Tale of Cake. He began with the fruity, fragrant spirit distilled in Glenmorangie’s towering copper stills, the tallest in Scotland. With necks the same height as a giraffe, they take Glenmorangie’s whisky on a longer excursion, for a more delicate spirit with more space for taste and aroma.

“He first aged this spirit in bourbon casks, for Glenmorangie’s signature citrus complexity. Then he transferred the whisky into Tokaji casks to create this limited edition’s wonderful balance of sweet, fruity flavors.”

As part of exploring this release, Lumden invited one Dominique Ansel, a pastry chef perhaps best known for creating the Cronut (a donut-croissant hybrid), to collaborate on potential food pairings. Ansel, in considering the whisky, “created a unique twist on a pineapple boat cake that, paired with a pineapple Old Fashioned cocktail by expert mixologist Jeremy Le Blanche … makes a deliciously indulgent CakeTail (cocktail and cake pairings inspired by and featuring Glenmorangie’s single malt).”

“When I first tried Glenmorangie, it opened my senses to this amazing world of colour, texture, taste, and aroma ̶ it’s a new adventure each time,” added Ansel. “I never guessed I could enjoy whisky this much, but there is a friendliness to the way Glenmorangie tastes. Baking and whisky making are different worlds but they have a lot in common. If you stir Dr. Bill’s passion for single malt with my love for cake, you get the best of both our worlds!”

Glenmorangie A Tale of Cake, bottled at 46% ABV, is available nationwide now for a price of around $99 per 750 ml bottle. You’ll find some official tasting notes, the recipe for the cocktail mentioned above and, for those who want the complete pineapple cake pairing, a video on how to make it from Ansel all below.

Method: Stir all ingredients with ice and strain into a rocks glass over block/ cubed ice.

Garnish with a twist of orange zest and a walnut.