The floor malting method requires a highly skilled craftsman. After being steeped in water, the barley is spread across the malting room floor and turned by hand over several days to allow for optimum germination of the barley. The malting team then decides when the barley is ready to move to the kiln.

“Passed from distiller to distiller throughout the generations, the floor malting process keeps a traditional part of the whisky making process alive with Benriach being one of only seven distilleries in Scotland to continue the practice of floor malting,” Global Brand Ambassador at Benriach Stewart Buchanan said in a prepared statement. “Distilling spirit from barley malted here on site is a true labour of love and something we are passionate about keeping alive here at Benriach as an ode to our creative whisky making heritage.” 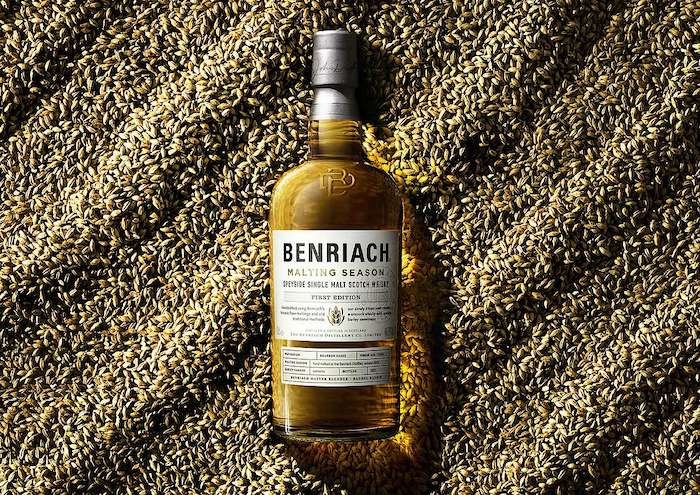 The first edition of Benriach Malting Season is two-cask matured in bourbon and virgin oak barrels and is gold in color with an aroma of barley sugar, almond fudge and poached orchard apple with smooth, rounded flavours of vanilla and honeyed pear, with a lasting nuttiness of slowly kilned malt, according to official tasting notes.

“At Benriach, we never stop exploring how fruit, oak and barley flavours intertwine and mature in our broad range of eclectic casks,” Master Blender at Benriach Distillery Rachel Barrie said . “The unique process behind Malting Season allows the cereal flavour from the concerto barley to pull through and when married with the creamy, wholesome flavour from being two-cask matured in bourbon and virgin oak barrels, creates a truly unique expression.”

For each new edition of Malting Season, Barrie will carefully select the type of barley and bottling strength. This inaugural release from the Speyside distillery is made from concerto barley and has a bottling strength of 48.7% ABV. It is comprised of 23 barrels, all distilled in November 2012, with 6672 bottles created in total. Availability will vary by country, with the UK version out now for £99 and the US version coming to market in October.