Spirits giant Diageo is known for showcasing the reach of its Scotch single malt whisky portfolio each year through the release of its Special Releases collection. It is a grouping of bottlings that vary in price, age and rarity, thus offering some flexibility for purchasing for those on a tighter budget.

Now Diageo is debuting the first in a new series of what they say are “collectable releases of magnificent, incredibly rare Single Malt Scotch Whisky.” Known as the Prima & Ultima Collection, it reportedly will allow one “to build a collection of rare and historic Scotch” based upon the very well considered selections of one Dr Jim Beveridge OBE, a master blender at Diageo.

“Over the past forty years I have worked intimately with our distilleries across Scotland and I’ve been fortunate enough to witness great change in the whisky industry,” said Dr. Beveridge in a prepared statement. “Each of the eight whiskies I’ve selected for Prima & Ultima tells a tale of heritage and craftsmanship and I’ve chosen them from distillers of great personal importance to me.” 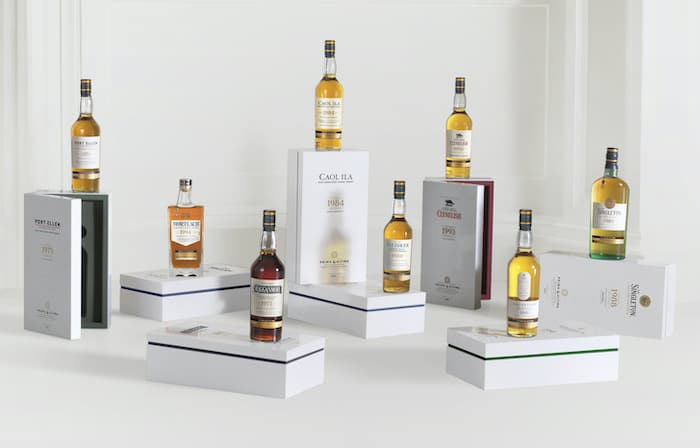 The inaugural release of The Prima & Ultima Collection will be available to purchase for £20,000 (around $25,000 USD) at the collection’s website. A global registration will open on July 22nd, 2020 for whisky collectors to register their interest. Each of the 238 full sets of cask strength bottlings that will be available for possible acquisition will be accompanied by a limited-edition book of personal stories from curator Dr. Jim Beveridge OBE and 20ml samples of each whisky.

Every bottle in the inaugural Prima & Ultima series, according to Diageo, “has a story to tell and is its own record of this significant period of whisky-making. Dr Beveridge marks the moment coal-firing of stills ended in 1971 at Cragganmore by including in the collection the last cask to be filled with whisky made this way at the distillery. The inclusion of three casks of The Singleton of Dufftown from 1988 marks a time when the grassy, fruit flavours were uncovered in The Singleton character from a new slow-craft technique. This complex, rich whisky is the first 30-year-old released of this kind.

“The existence of prized 1979 whisky from a silenced Port Ellen, stoically maturing for 40 years, also speaks to the end of an era – and is a nod to the spirit of invention that will return when the beloved distillery will open its doors once again.

“During his career at Diageo, Dr Jim Beveridge spent considerable time at Lagavulin to learn how the true distillery character is refined and perfected. The vintage he selected from this distillery comes from a handful of refill American oak hogshead casks filled right around this time, in 1991. A 26-year- old Clynelish from 1993 represents a triumph of his inquiry into how this distillery character reveals its renowned waxiness.

“His taste for the exceptional also informs this collection: six standout casks of Talisker with a more rounded and gently peated style to the distillery’s smoky signature have been carefully safeguarded for a moment like this since 1988, the last of their kind.

“Meanwhile, a 1984 cask of Caol Ila, number #5773 to be specific, was the first of a new style, and this bottling tells the story of a decade-long chase for this cask’s recovery. The final addition to this inaugural number, a muscular 25-year-old Mortlach takes its place as one of the last remaining first-fill Pedro Ximenez seasoned oak butt casks from 1994.”

You’ll find more specifics on each bottling below, including official tasting notes, for your consideration. It should be noted as well there will also “be an opportunity to own the very first set of the series, one of just 238 full sets, when it goes under the hammer for charity at Sotheby’s online auction from 26th August – 2nd September 2020 in London. Bottle No 1 of each of the eight bottlings has been signed by Dr Jim Beveridge and all proceeds will be donated to Diageo’s charity partner WaterAid.”

The First Release of The Prima & Ultima Collection:

All of the single malt Scotch whiskies included are natural cask strength, non-chill filtered, with no colour added.

A 1984 Caol Ila from a single refill cask (#5773) – the first release of a new style at the time, this particular cask was recovered after initially being sold. Mild in aroma, it is rich in texture with a long smoky-spice finish.

One of the first casks filled after the mysterious waxiness of Clynelish was understood and perfected. This 1993 small batch release is aromatic and intense, with a waxy, creamy smooth quality that is now the distillery’s hallmark.

This is the very last cask of whisky which was made at Cragganmore on coal fired stills – cask #2301 – before the switch to oil-fired steam heating. A remarkable piece of history from a single first fill ex-Sherry butt, the whisky’s flavours run deep with hints of dark chocolate, it has a long fresh and drying finish.

Distilled not long after Lagavulin’s true distillery character was refined and perfected, this whisky comes from a handful of refill American oak hogshead casks filled in 1991. This 28-year-old is the first to highlight the pure golden Lagavulin spirit, thanks to carefully managed cask influence, and has a terrific depth of flavour.

One of the last remaining first-fill Pedro Ximenez / Oloroso seasoned oak butt casks from 1994. The result is a 25-year-old with robust muscularity – the deep, rich style of mature Mortlach that earned its name as ‘The Beast of Dufftown’, by whisky expert Dave Broom.

One of the very last 1979 European Oak butts from Port Ellen, selected from the few casks remaining, long after the Islay distillery closed in 1983. It characterises Port Ellen at its peak – expressing to the full the wonderful balance between sweetness, saltiness and smokiness that is elegant and full of flavour after forty years.

From three of the last remaining casks filled in 1988, at a time when the new grassy, fruity flavours were uncovered from a new slow-craft technique at this Singleton distillery. This complex, rich whisky is the first 30-year-old released of this kind.

A 31-year-old Talisker from the last 6 casks that showed an unusual less peaty, more rounded character, specially put aside in 1988 to mature. A Talisker full of vitality with sweet, smoky and peppery flavours.