What more can be said about Scotch whisky distillery The Macallan at this point? 2018 has simply been a breathtaking year for this brand so far, with a core range refresh, a brand new distillery, and the release of a 72-year-old whisky. Alongside all of that comes word now of two new limited edition releases, each based on different line extensions in different price spectrums.

The first of these two is the new The Macallan M Black 2017. This very high end bottling is a non-age statement expression that’s seen as an “evolution” of the distillery’s classic M Decanter in that it is crafted from black crystal from Lalique. The whisky itself is drawn from hand selected, sherry-seasoned oak casks that are a trademark of The Macallan’s maturation programs. 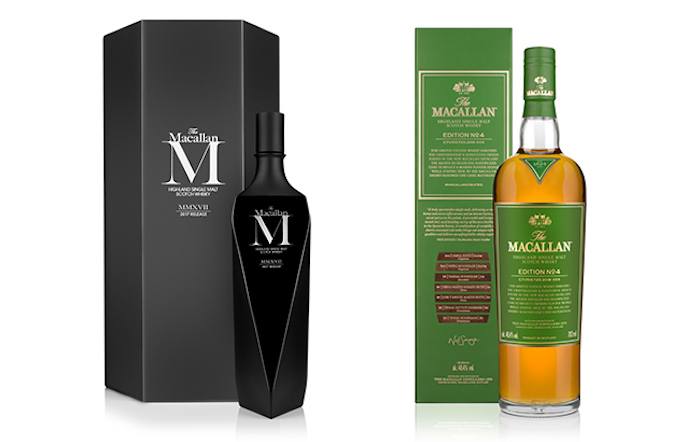 Bottled at 45% ABV and having what’s described as a rich natural color, very limited official tasting notes it has elements of “dark fruit, chocolate and espresso, which open into wood spice and an edge of peat. The nose has a rich cherry chocolate sweetness and fresh citrus notes.” Just 725 decanters, each sporting their own engraved numbers, have been released at a price point of £5,400, or around $7,200 USD.

“Presented in an extraordinary handcrafted black crystal decanter,” said Geoff Kirk, director of prestige for The Macallan, in a prepared statement, “M Black reflects a lifetime of whisky and continues to showcase the vital influence of The Macallan’s exceptional oak casks and the ultimate craft of whisky making evident through the entire M range. M Black is a true work of art which raises the bar for whisky decanters around the world.”

Joining The Macallan M Black 2017 is Edition No. 4, the fourth release in the ongoing Edition Series which we’ve highlighted before. It typically has focused on exploring the distillery’s relationship to wood. This particular bottling dials in to the “structure of the whisky” and is inspired by the new distillery itself.

Edition No. 4 is bottled at 48.4% ABV and drawn from a mix of European and American oak casks. Pricing around £82, or about $110 USD, limited official tasting notes suggest “a ‘zesty, vibrant and invigorating’ single malt with notes of rounded honey, sweet toffee and citrus fruits.”