The Aston Martin DB5 is considered by a range of car aficionados to be one of the most famous cars in the world, if not the most famous. It is most well known by those who are fans of the James Bond spy film series, it having been linked to the character starting back in 1964. On a more practical level, when the vehicle debuted it had a subtle engine capacity increase over its predecessor, which made it, as the car brand puts it,  “that much more of a sporting saloon which, combined with its exceptional styling, helped it to become one of the most desirable and admired sports cars of its generation.”

Now, in 2020, Aston Martin has linked up with Scotch single malt whisky label Bowmore to release the Black Bowmore DB5 1964, a super high end bottling distilled in 1964, a year which is said to hold significance for both brands. For the automaker, it is already outlined previously. For the distillery, 1964 was when “the arrival of a new boiler saw the distillery enter the modern age of distilling as coal fires made way for steam in heating the stills. It was the first distillation from this new boiler that produced the spirit which was to become the iconic Black Bowmore.” 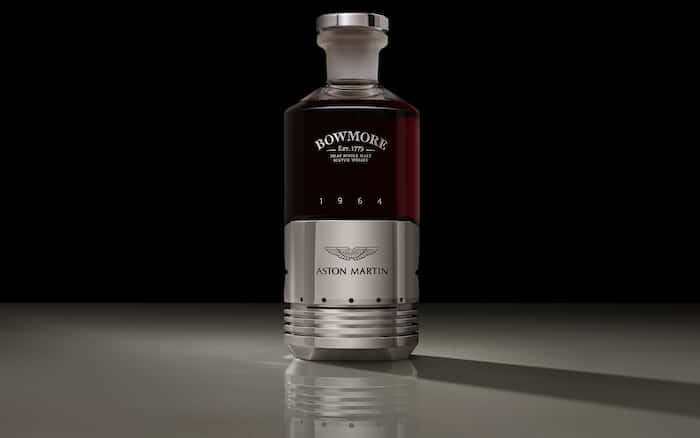 “1964 represents a significant date in the modern history of the distillery,” said David Turner, Distillery Manager at Bowmore, in a prepared statement. “Not only a key moment in how we distilled our spirit, but perhaps even more significant as this very spirit went onto create Black Bowmore. These defining moments are fundamental to the history of Bowmore.

“This collaboration with Aston Martin has allowed us to once again showcase this iconic single malt in the most incredible way.” 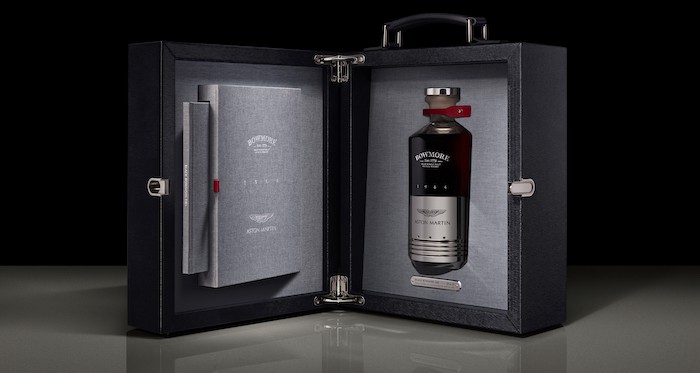 What one specifically has with this whisky is a 31 year old expression that was aged in an ex-Williams & Humbert Walnut Brown Oloroso Sherry Butt. It is bottled at 49.6% ABV and comes in extremely high end packaging, of course. The bottle itself, for example, was produced by Glasstorm, a bespoke contemporary glass studio that’s based in North East Scotland and which took up to a week to complete each decanter. The presentation box, meanwhile, is handmade and “created from the finest string-grain calfskin, featuring a custom solid brass latch and hinges, plated with nickel, reflective of the DB5.”

Only 25 bottles of the Black Bowmore DB5 1964 are being made available starting in late fall, pricing at £50,000, or a little bit over $65,700 USD. It should be noted of this release that Black Bowmore, in general, is an extremely rare offering. This expression is only the 6th such time it has been made available, and, since 1993, only around 6,000 bottles have come to market in total. Ironically, when the 5th edition debuted back in 2016, it was considered the very last of this Scotch at the time.

You’ll find some official tasting notes for the whisky from the distillery below.