Scotland’s Tomatin distillery has, among its higher end offerings, its Warehouse 6 collection, so named for a traditional dunnage warehouse on the distilling grounds that holds some of the most precious casks they have to offer. The latest of these heralds from having been distilled in 1977 and aged some 42 years in an ex-Sauternes wine cask.

The new Tomatin Warehouse 6 Collection, 1977, according to those behind it, is a single cask release (cask #38863) that was matured for over four decades in a Sauternes wine cask. It is said the “complex meteorological conditions that surround the towns of Sauternes and Barsac” in France result in producing extraordinarily sweet wine, carrying over somewhat into the final flavor profile of this 49% ABV expression.

Of the thousands of casks held at Tomatin,” said Graham Eunson, Distillery Operations Director, in a prepared statement, “we’ve only ever acquired a handful of Sauternes wine casks. Using any one of them, even for one of our oldest and most valuable whiskies wasn’t a decision we made lightly; we knew from the start that it could be difficult to impart the flavours of the wine cask to the whisky without overwhelming it. 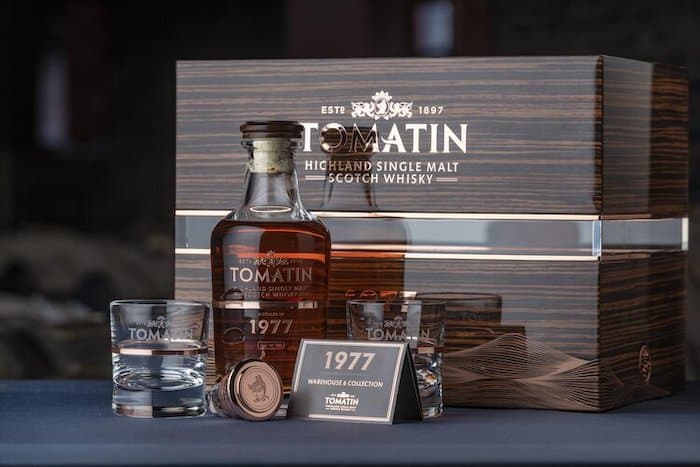 “Despite the immense challenge, I’m pleased to say that our team has produced a truly exceptional whisky that includes notes of apricot, peach, sweet honeysuckle and spice, all enticed from the Sauternes cask’s influence.”

As it stands now plans call for just 390 bottles, each pricing at £3,000 (around $3,925 USD), to be released throughout the UK and the world. It has been decanted into a hand blown Glencairn Crystal decanter with unique copper decoration. This luxury bottle is presented with two glasses (also Glencairn Crystal), a solid copper stopper, along with a numbered certificate detailing the journey of the whisky. You’ll find some official tasting notes below.

A delightful explosion of orchard and tropical fruits set the scene,soon met with bursts of rich vanilla and salted caramel. Vivacious notes of oak aged Chardonnay, sweet honeysuckle, and baking spice, enticed from the Sauternes cask influence, dance across the palate resulting in a gloriously long finish.