The world of older Scotch single malt whisky is one often divided between direct distillery releases and those sourced by the healthy independent bottler market of Scotland. It is this latter that typically ends up with casks of super aged spirit, some of which heralds from so-called “silent distilleries” that long ago shut their doors. Gordon & MacPhail is one such bottler, having recently debuted its Summer Collection of expressions that includes some of the oldest ever whisky releases from two silent distilleries.

As for specifics of each, here’s what Gordon & MacPhail has on each of these. It should be noted as well each one is “contained in bespoke crystal decanters housed in beautifully crafted wooden veneer presentation cases:” 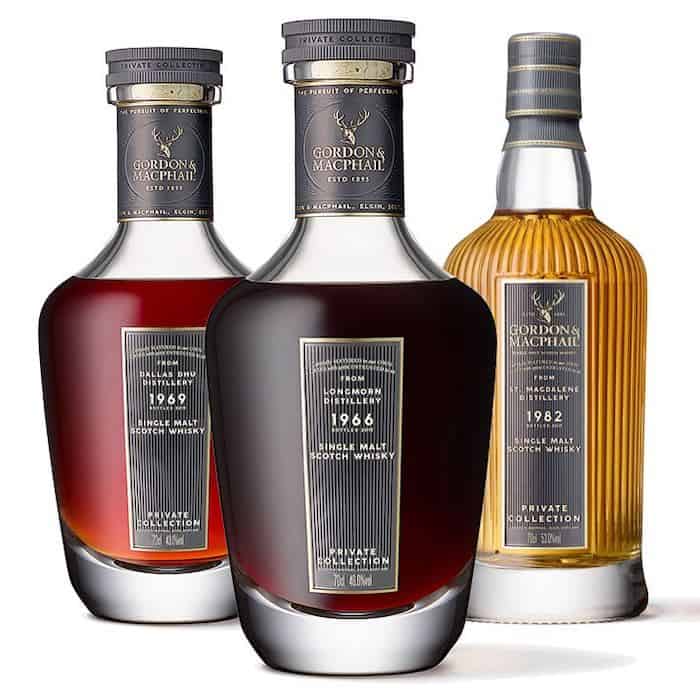 Less than two miles outside Forres, Dallas Dhu was one of the westernmost Speyside distilleries. Closed in 1983, the distillery was designed by famed architect Charles Doig, who also designed the Gordon & MacPhail retail shop in Elgin.

Matured in a refill Sherry hogshead cask no. 1656 on 10 June 1969, only 176 bottles of Gordon & MacPhail 1969 from Dallas Dhu Distillery will be available for purchase from selected specialist whisky retailers internationally

The Gordon & MacPhail 1982 from St. Magdalene Distillery is believed to be one of the oldest bottled single malts from the distillery which used to stand in Linlithgow in the Scottish Lowlands.

A distillery with a rich and varied past, St. Magdalene was initially known as Linlithgow Distillery, before a merger with Bonnytoun Farm Distillery in 1826 led to a renaming. The distillery was built on the lands of St. Magdalene’s Cross Convent, although today all that remains is the malting barn and kiln.

Laid down the year prior to the distillery closing its doors for the last time, the Gordon & MacPhail 1982 from St. Magdalene Distillery was matured in cask no. 2092, a refill American hogshead. Only 161 bottles available to purchase from select whisky retailers internationally.

Unlike many Scottish distilleries founded during the whisky boom at the end of the 19th century, Longmorn has continued with constant production right up until the present day. Just 398 bottles are available of the Gordon & MacPhail 1966 from Longmorn Distillery, with the 53-Year-Old single malt whisky matured in cask no. 610, a first fill Sherry butt.

“Our ‘Private Collection’ whiskies embody the expertise, skill and patience that has been passed down over four generations of my family, said Stephen Rankin, Director of Prestige at Gordon & MacPhail, in a prepared statement. “My grandfather, George Urquhart, recognised an opportunity to match new make spirit with carefully selected casks at a time when the vast majority of production went into blends. Over the decades he was able to master this art which has become his legacy.

“He could never be persuaded to bottle a whisky before he believed it had reached its ultimate peak in terms of quality – a tradition we’re proud to continue today.”

21
Shares
921
Views
Share on FacebookShare on TwitterGet Our Newsletter
Free shipping on any Bruichladdich product at ReserveBar with code BRUICHLADDICH! Valid 7/30-12/31. Shop Now!