The Glen Moray distillery, founded in the town of Elgin, the capital of the Speyside whisky region, in 1897, has a long history of making use of a wide variety of casks to mature new make spirit in. One of its latest limited edition offerings continues this trend, taking the form of a Scotch single malt whisky aged entirely in ex-sweet Madeira hogsheads.

The new Glen Moray Madeira Cask Project, according to those behind it, spent 13 years and 10 months aging in ex-sweet Madeira hogsheads. Madeira, a fortified dessert wine these casks previously held, is made exclusively on the subtropical Portuguese isle that shares its name, just west of Morocco. It is said “just seven of these casks were laid down in 2006, tucked away undisturbed in ‘Warehouse 1’ – home to the Elgin-based distillery’s maturation experiments over the years.” 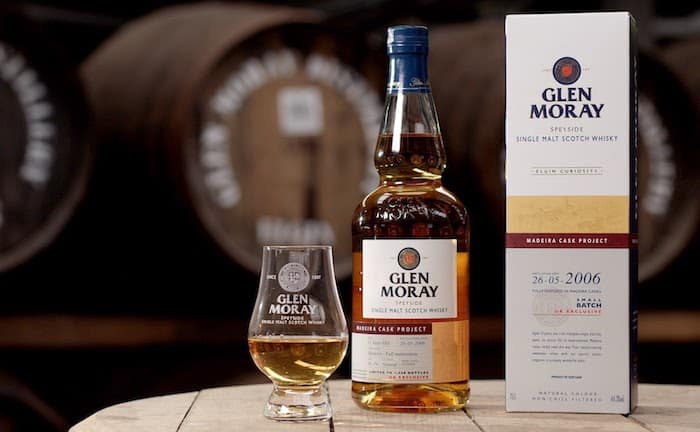 “Single malt whisky matured in Madeira casks has been prized in the industry before,” said Dr Kirstie McCallum, Glen Moray’s head of whisky creation, in a prepared statement, “but typically the casks have only been used to ‘finish’ more conventionally matured whisky. That’s what makes this new expression so very special.

“Our new make spirit has been slowly mingling with the luxuriously sweet flavours of Madeira for nearly 14 years, giving a depth of flavour and an intense character that couldn’t otherwise be created. It’s a delicious dram, a dessert in a glass, and we are very much looking forward to sharing it with whisky drinkers in the UK.”

Just 1468 bottles have now been released to the UK market as the third expression in the ‘Elgin Curiosity Range,’ which is said by the brand “to push the boundaries of single malt maturation and celebrate Glen Moray’s long standing passion for cask experimentation and flavor.” The whisky is bottled at 46.3% ABV and prices at £65, or about $82 USD.