Laphroaig Gets A Royal Drop In For Its 200th Anniversary

The Prince of Wales, also known in Scotland as the Duke of Rothesay, has a thing for whisky, there is no doubt. Prince Charles, for example, helped kick off a new Scotch distillery recently, and now he has ventured north from London again, this time to help Laphroaig celebrate its 200th anniversary.

Laphroaig, located on Islay in Scotland’s Inner Hebrides, is said to both be the only single malt Scotch whisky to bear a Royal Warrant and also be a favorite of Prince Charles. It is the third time he has shown up there over the last 25 years, personally bestowing the Warrant when he visited back in 1994. 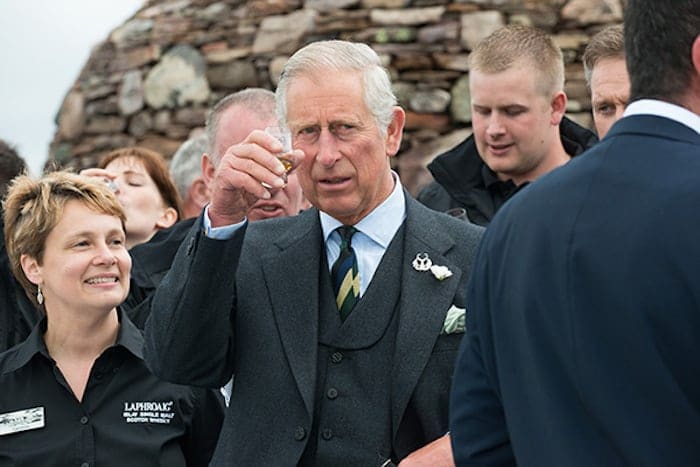 For this time around he toasted the anniversary of the distillery by “raising a dram of limited-edition Laphroaig 15 Year Old Single Malt,” according to officials there. He also met a number of the employees; filled, bunged and signed an ex-bourbon cask; and unveiled a plaque in the Friends of Laphroaig’s field to officially open a cairn (a traditional Scottish monument made of rough stones) commemorating the 200th anniversary.

Tied to this royal drop in was the debut of the distillery’s new “Laphroaig Legacy Fund, a charitable initiative aimed at supporting Islay’s people, community and environment in 2015.” Through it Laphroaig will be auctioning off bottles and casks of 40 Year Old whisky signed during the prince’s last visit. According to them,

a corporate donation from [distillery parent] Beam Suntory and £1 donation from every bottle of Laphroaig 21 Year Old and Cairdeas sold through the Laphroaig Visitor Centre and Online Shop in 2015 will also be put towards the fund. Following an application and selection process, a series of targeted grants will be issued to the successful beneficiaries; these could include community projects, environmental sustainability programmes or initiatives that enhance the skills sets of islanders.

“We are absolutely delighted to welcome the Prince back to Laphroaig to commemorate what is a momentous year for our distillery and brand,” said John Campbell, distillery manager of Laphroaig, in a statement. “We are extremely grateful for his ongoing support over the years, which has helped enable us to preserve the unique heritage of the Scottish whisky industry and to give back to our community. Our 200th anniversary is an opportunity for us to continue to support the region through The Laphroaig Legacy Fund, celebrate our position as an integral part of the local economy, and help ensure that the community of Islay can prosper into the future.”