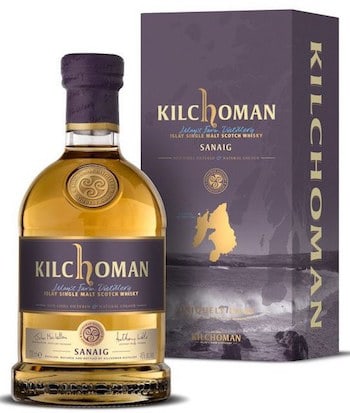 Kilchoman, a Scottish Islay distillery that’s one of the smallest whisky makers in that part of the world, has been around for only a little over a decade. The Scotch it produces is generally well received by those who know about it, and now a new bottling is being made available for general distribution that is non-age statement in nature.

The Kilchoman Sanaig whisky is so named because it is inspired by a rock inlet of the same name that’s northwest of the distillery. It has a predominately sherry cask influence to the color and taste, owing to the reportedly significant time spent in Oloroso sherry casks.

Sanaig was first released in a limited amount last year, and now becomes the second continuously available release from the distillery. It follows in the footsteps of the mostly bourbon cask matured Machir Bay, itself another non-age statement release.

“Sanaig is a bold marriage of sherry and bourbon cask maturation,” said John MacLellan, Kilchoman Distillery Manager, in a statement. ” It is both a continuation of the classic Kilchoman style people know and love as well as a development fans of Kilchoman have yet to experience.”

Pricing for Sanaig is currently set at around £53, or about $75 USD. Though it is already out in retail overseas, there was no immediate mention of when it would appear in American liquor stores.