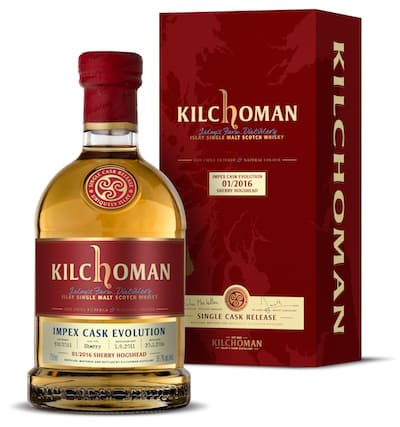 Kilchoman is well known to lovers of Scotch whisky as that “Islay farm distillery.” It is quite young compared to its much larger neighbors on Islay, now just over a decade in age. It has enough product these days, however, to bring a good amount to the U.S., which is where ImpEx Beverages comes into play. This importer looks now to have teamed with Kilchoman on a co-labeled bottling, unveiling the ImpEx Cask Evolution series.

The Kilchoman ImpEx Cask Evolution bottling series, according to the importer, “demonstrates the importance of quality casks in the development of a fantastic Scotch whisky.” What’s particularly unique about this inaugural selection, drawn from an Oloroso sherry hogshead, is that it was

one of the last selected by John MacLellan, who had been Kilchoman’s distillery Manager and recently passed away after a long battle against cancer. As a humble tribute to his legacy, [it has been] unofficially called … the MacLellan Cask.

The release was bottled at 58.7% ABV and is a limited edition, consisting of just 300 bottles for this single cask release. Though there is no specific age statement on the bottle, other information on the label suggests it is under five years old. This was at least long enough for the whisky to take on “the rich Oloroso sherry” color of the cask it was in.

ImpEx is pricing this bottling at around $145. Official tasting notes for it can be found below for your consideration.