Kilchoman Distillery recently released its 100% Islay 11th Edition, noted for being an expression drawn from the farm distillery’s own barley before malting, distilling, maturing and bottling of every bottle on site.

The 100% Islay 11th Edition was distilled from 2007, 2009, 2010 and 2011 barley harvests before being matured for a minimum of 9 years in 26 bourbon barrels and seven oloroso sherry butts. The combination of lightly peated barley matured in both bourbon and sherry casks creates an intense combination of floral sweetness, layers of rich fruity character and soft maritime peat smoke, the distillery said.

Earlier editions of the 100% Islay range were typically matured in bourbon barrels. Now, the distillers have been experimenting with more sherry casks in the 8th and 10th editions, including seven and two sherry casks, respectively. This year’s release has many similarities with the 8th edition, both having 40% sherry matured whisky in the vatting. 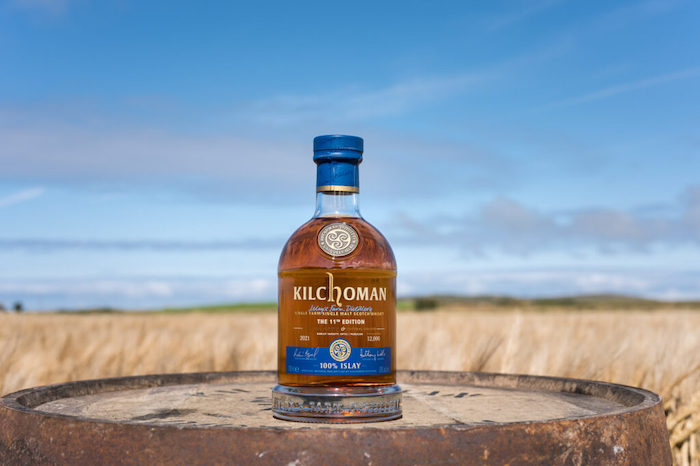 The 8th edition, though,  was a minimum of six years old, whilst the youngest whisky in the 11th edition is nine years old. This adds a huge amount of layered rich influence which balances with the lighter influence of the 26 bourbon barrels selected by head distillers.

“Having tasted some excellent older sherry butts we quickly decided that they were at their peek, we then tried a few bourbon barrels of a similar age and the backbone of this edition came together very easily,” said Anthony Wills, Kilchoman Founder & Managing Director, in a prepared statement. “Our bourbon barrels and oloroso butts are incredibly consistent and this combination of roughly 40% sherry butts and 60% bourbon barrels works phenomenally with the style of whisky we produce. It allows both the citrus sweetness of our spirit and the rich fruity flavours of the casks to balance perfectly”