Kilchoman Distillery Gets Into Wine Cask Finishing With New Whisky

The Scottish farm distillery Kilchoman, located on Islay, is known for whiskies which see full maturation time in ex-wine casks such as port, Madeira, red wine or Sauternes. The distillery team there is now looking to get into wine cask finishing, which sees the Scotch first aged in another barrel type, such as ex-bourbon, before transferring to the other storage vessel. The first bottling in this regard is now being released in the form of a Sauternes cask finish.

The Kilchoman Sauternes Cask Finish, according to those behind it, was initially matured in ex-bourbon barrels from 2012 forward before being finished in ex-Sauternes wine casks for a period of five months before bottling. It is said that this “finishing period allows the caramel and vanilla influence of bourbon barrels to be accentuated by the buttery sweetness of the desert wine casks. Meanwhile the classic peat smoke and citrus character of the Kilchoman spirit brings a distinct depth and punch to the whisky, emphasised at the increased strength of 50%.” 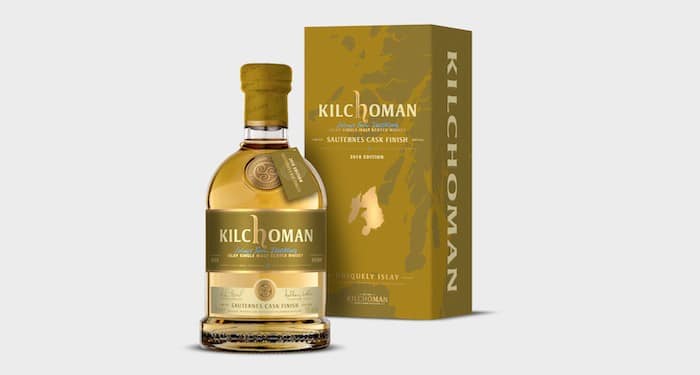 “The full-term wine cask maturations that we’ve released in the past have been hugely successful,” said Anthony Wills, Kilchoman founder, in a prepared statement, “but we wanted to show a more measured approach this time around. The five month Sauternes finish has allowed a more subtle sweetness and buttery character to be imparted into the spirit while maintaining the fresh fruit, citrus and vanilla notes so typical in Kilchoman releases.”

Plans call for approximately 10,000 bottles drawn from 30 casks to be released for this expression, with a price point of at least £78, or a little over $100 USD. The whisky is lightly peated at 50 ppm.