Johnnie Walker blended Scotch is so ubiquitous that people sometimes take it for granted. Each of its blends consists of a different lineup of single malt Scotches from distilleries owned by Diageo, as well as some of their grain whiskies. In a world where single malt is all the rage, the Red Label blend is consistently one of the best-selling whiskies of all time, and is often the “gateway” dram on the rocks or in a highball for whisky newbies. Blue Label is one of the best-selling whiskies in the luxury category, and it’s awfully hard to miss that gold Striding Man logo when passing through an airport.

The Johnnie Walker brand continues to find new ways to engage whisky aficionados as well as attract new fans. I spoke to Diageo whisky ambassador and educator Ewan Morgan about the brand’s history and the multitude of ways to enjoy it around the world. 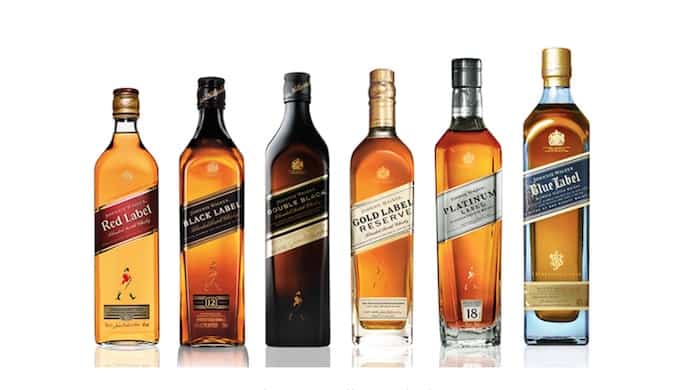 Amanda Schuster: How did the Johnnie Walker brand come about?

Ewan Morgan: John Walker’s father died on their family farm in Kilarnock when he was 14. The family sold everything they had and purchased a grocery store. The only documents we have to verify they were selling spirits there showed they sold brandy, rum, gin and Islay whiskey, though the distillery isn’t specified. Which leads us to believe they were already taking whiskeys from Islay and blending them together, but we don’t know. So it may be coming from Lagavulin, or Ardbeg…

We’re not exactly sure how the blending started. One theory is to consider all grocers at that time were selling tea and items like that, and they think that’s where he got his blending skills. Then again, we don’t know. We don’t even have a picture of him! It’s all a bit of a mystery.

What we do know is that in 1850, we have a record of them selling their own brand, which was Walker’s Kilarnock Whisky. Now, what’s interesting, is that is actually illegal, because it wasn’t until the Spirits Act of 1860 that blends were made legal. Technically they were breaking the law, but everyone was doing it at that point. It wasn’t very strictly enforced.

In 1857 Johnnie Walker passed away and left the business to [his son] Alexander. It wasn’t until 1865 that we saw what was the “precursor” to what we have as Black Label today, which was an islay blend with no age statement. In 1877 they registered the classic label.

Some other fun facts from the early days, according to Morgan:

AS: How did the Striding Man symbol come about if there was no image of the actual Johnnie Walker to go by?

EM: He certainly doesn’t look like an Edwardian grocer! They came up with this dandy in his top hat, riding breeches and jacket to reflect the “upper echelon” of society. It was over a business meeting in London in 1908, probably over whisky at lunch. Fun fact: Up until 1999 he was facing left, going backward, and in that year they flipped him so he’s walking forward. That’s where the “keep walking” mantra came about.

AS: Why name the blends after colors?

EM: They started because it was easier for people to pick them when they came into the store, they stood out on the shelf. What people were starting to do, is call them by “White Label,” etc.

AS: How does a blended Scotch stay relevant in a single malt world?

EM: They are working on 150 projects at any given time. Some of them fall by the wayside, and others come to light. Such as Johnnie Walker Rye Cask finish, which was just for the US market – taking Cardhu and other single malts and adding those into single grain scotch and finishing them in Bulleit and George Dickel rye barrels. So not just keeping up with innovation, but local market demand.

Last year, Guam, as a matter of fact, requested their own bottling of Blue Label. There’s only 600 bottles of it (note to collectors…). Then there’s Johnnie Walker Blue for the Year of the Monkey. There’s one that only goes to Japan called “Old Harmony” and the ultra rare ones like Excelsior [a whisky from 1947 bottled in the late 1990s]. They have Diamond Jubilee that costs $160,000 with only 60 bottles available, which is a 1952 whisky bottled in 2012… There’s definitely an appetite for that ultra rare, but Johnnie Walker Red keeps the lights on. By far the world’s best-seller.

AS: Can you comment a bit about the enormous task set before the master blenders?

EM: They don’t sip anything until the final blend – everything is picked out by nosing. The individual whiskies are brought down to 20%. From there, they can detect taste, viscosity and aroma just by nosing, and they have 8.5 million barrels available to them! They’re [the blenders] like the Rain Man of whisky. They can open any cask and tell you everything about that whisky just by aroma.” 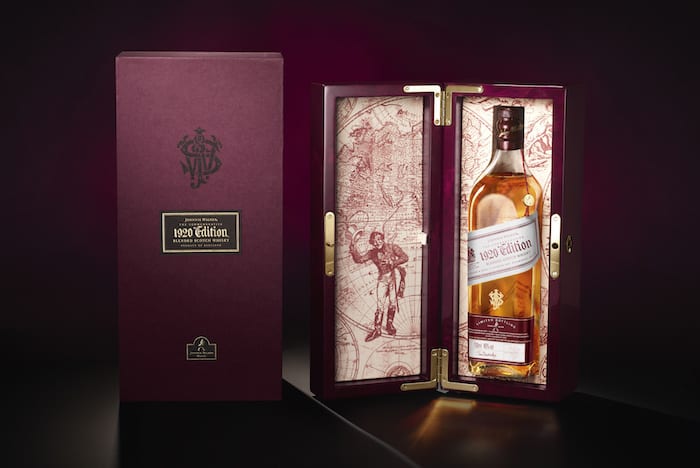 A bottling available at the Johnnie Walker Houses (image via Diageo)

AS: What’s the deal with the Johnnie Walker Houses?

EM: Currently we have three: Shanghai, Seoul and Beijing [with other boutiques in the Taiwan and Mumbai airports]. They are embassies for JW, people come in and have their own blends created and view a mini archive of the brand’s history as well as taste whisky. They’re mostly ultra exclusive, with invite-only events. They have their own architects, high-end designers and dedicated archivists.

We both agreed they should open one in the states!

Meanwhile, while traveling abroad, it’s exciting to pop in to the duty free to see which new JW bottles to pick up. A few to look out for:

Cheers to the Striding Man, and may he keep walking!