The former continues the distillery’s long-running history of Chinese New Year release, with a new bottle design and packaging meant to reflect the year’s Zodiac sign. With 2021 set to be the Year of the Ox, both the bottle and gift box feature a stunning rendering of that animal, created by Chinese artist Shirley Gong. 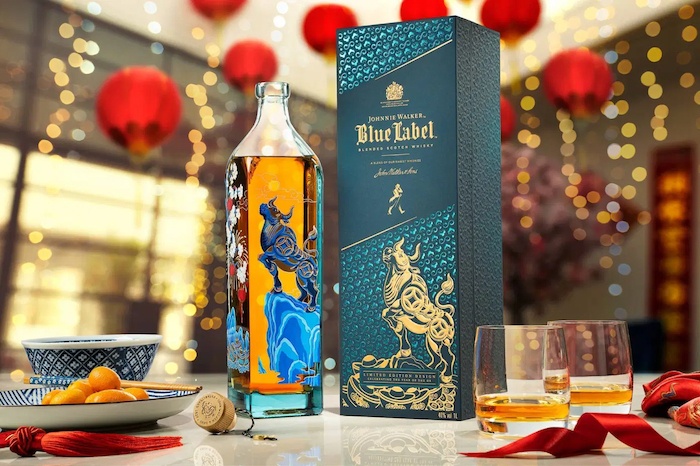 “I wanted this limited edition to be something that would celebrate and honour Chinese New Year as well as a piece of art that speaks to the rare craft and character of Johnnie Walker Blue Label,” Gong said, in a prepared statement. “I was keen to create something that reflected the majesty of the ox but also a work that inspired people to think about the future in a positive and optimistic way – making sure that this gift was something to give people hope for the coming year.”

The whisky itself is specially chosen for Blue Label release from among the 10 million casks that Johnnie Walker has maturing at any given time, and includes some “ghost” whiskies reserved from distilleries that have long since shut their doors.

The John Walker & Sons King George V is rarer still, using whiskies from distilleries that were in operation during the 25-year reign of King George, which ran from 1910 to 1936. The blend was originally created to celebrate the company receiving a Royal Warrant from the king in 1934, allowing them to supply their whisky to the British royals of the time.

For their new limited edition release of King George V, Johnnie Walker is presenting a new bottle design and gift box that offers a modern spin on the designs and colors found in traditional Chinese fashion.