A little over a year ago, Scotland’s Isle of Arran Distillers debuted The Smugglers Series, a limited edition trilogy of whiskies each housed in a container designed to look like a book with a cut out interior. The distillery is back now with part two of the three planned bottlings, known as Isle Of Arran The High Seas.

Isle of Arran The Smugglers’ Series Vol.2 ‘The High Seas,’ the distillery said, pays “tribute to the exuberant character of those striving to outwit the Government’s representatives in the pursuit of the production of the famed Arran Waters.” The scotch is noted as being “a powerful marriage of whisky matured in the finest rum casks with time-honoured peated spirit and a rich layer of first-fill bourbon barrel adding sweetness and fruit.”

Plans call for 8,700 bottles of this whisky, bottled at a natural cask strength of 55.4% ABV, to be made available. It is pricing around £87 (about $105 USD) and is both non-chill filtered and of natural color. Official tasting notes are below from the distillery for your consideration. 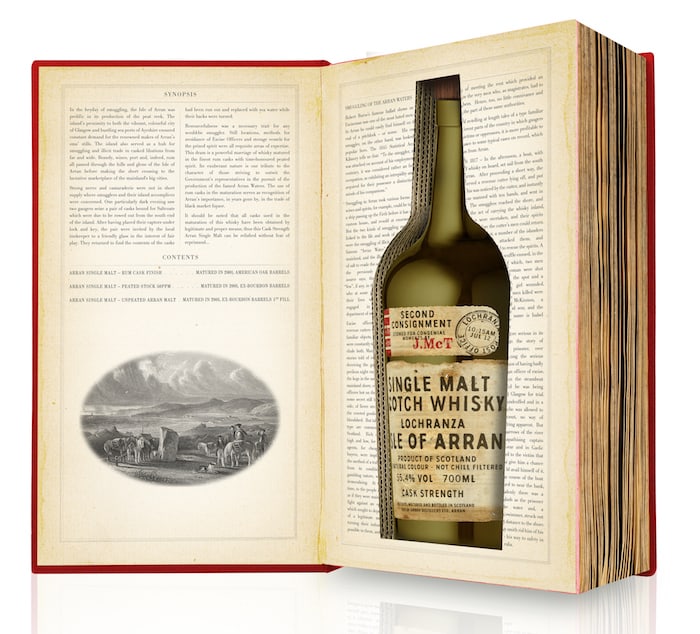 Nose: Citrus fruits are at the fore, mingling with smells evocative of the outdoors; a touch of seaweed hints at coastal character. Orchard fruits, white pepper, and a subtle dry note reminiscent of fino sherry make this a complex nose. A hint of burned pine wood is in the background.

Palate: A fizzing mouthfeel with sherbet character. A fresh spearmint note appears and mingles with warm bramley apple pie and ice cream. There is tangy lime marmalade with chili pepper heat and a whiff of smoke from a just-lit fire of pine logs. The addition of water shows honey dew melon and pear drop sweets.

Finish: Distillery character shines through; notes of apples, citrus and good body are elongated by a backbone of subtle smoke.

Shares
334
Views
Share on FacebookShare on TwitterGet Our Newsletter
Get The Glenlivet 18 Year Old at ReserveBar. Shop now!