Keith Burnett, a craftsman based out of Blairhoyle, Scotland, broke in to Scotland’s thriving drinks industry in the last few years through his creation of Modern Stone Age whisky stones. These stones, designed to cool drinks without affecting their taste, are cut from giant, upwards of 25 ton rocks and hand finished into tiny, 20mm cubes.

Keith’s family has lived in Blairhoyle for nearly two centuries. He is also, in a way, a piece of the landscape’s history, along with the natural rock formations he chisels into whisky stones. 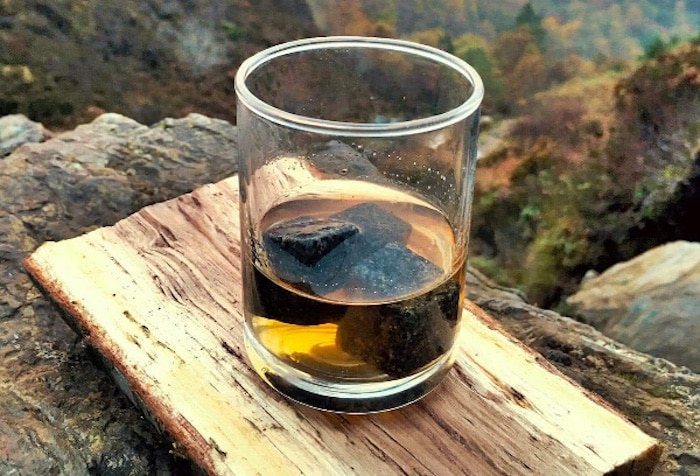 “As well as being famous for its distilleries, Scotland is also home to some of the oldest rock formations on the planet,” explained Burnett in a prepared statement.

“We saw a gap in the market for an ‘all Scottish’ product fit for our national drink. While many whisky stone products on the market are made from American soapstone, our drink stones come from the very mountains that produce some of the world’s finest whiskies. We only use local whinstone and greenschist– some of the hardest and densest stones on earth. The stones work to cool a glass of complex single malt whisky or beautiful botanical gin without diluting its distinctive taste.”

Keith sources his materials from Tradstocks, one of Scotland’s largest natural stone suppliers located just down the road from him. He even fashions his own tools out of the region’s natural stone as a means to perfect the manufacturing process.

“For thousands of years man has relied on stone products and they’re just as useful today,” said Burnett. “Unlike cutting large pieces of stone there is a lot more precision involved. Just 1 millimetre out and the stone will look lopsided. I also discovered, after lots of research and experimenting with different sizes, that 20mm cubes were best for temperature retention.”

Burnett, who grew up in a farming family, became inspired by buildings and stone salvage while working in construction. He noted how the structures were “perfectly built by extremely practical and clever people without the assistance of lasers, CAD programs, global positioning systems or machinery,” which amplified his interest and passion even further in stonework.

“I have worked with stone all my life,” he said, “from building and repairing drystone dykes when I was young to building new houses with stone today.”

Keith will be collaborating with Scottish whisky brands to create custom-made stones that match the regional rocks where the drinks are distilled. He also sells his stones for whisky (and gin) directly from his website.