The city center of Edinburgh, Scotland has been without a functioning Scotch whisky distillery since 1925, when The Edinburgh Distillery (aka Glen Sciennes) closed. It has also been reportedly almost 100 years since whisky was lasted distilled in this Scottish city, which is pretty crazy when you think about it as Edinburgh is the capital of a major whisky producing region. All of this has now changed though with word that the new Holyrood Distillery has now opened.

The Holyrood Distillery, as we noted some years ago when we first learned about it, is built in the Engine Shed building, a 3-story, former railway goods shed dating back to 1831. It cost £6.7m (around $8.15 million USD) to build, and includes two exceptionally tall stills that, at 7m tall, are said to be the tallest stills in Scotland in proportion to their volume. Using self-described “innovative production approaches, such as a complex combination of yeasts and a unique selection of different types and styles of malted barley,” it will initially produce four core flavors of whisky – smoky; sweet; spicy; and fruity/floral – and is also providing daily guided tours throughout the year.

The distillery is the notion of Canadian Rob Carpenter who, in 2013, is said to first had the idea for a distillery and visitor experience in central Edinburgh. Carpenter, who founded the Canadian branch of The Scotch Malt Whisky Society together with his wife Kelly, has “brought his vision to life in partnership with co-founder David Robertson, who has 25 years’ experience in the industry.” 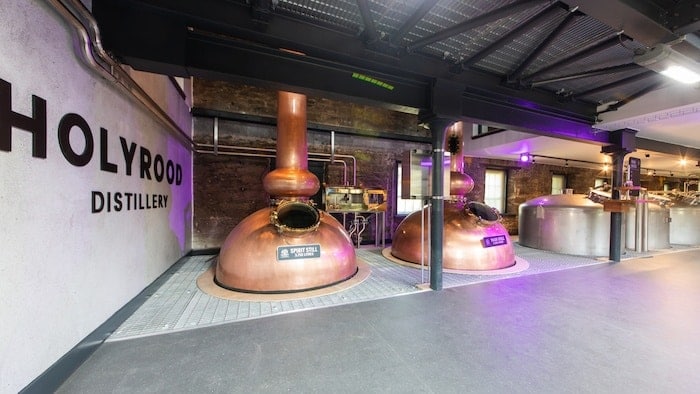 “After all the hard work of the team, it’s a really special moment to now see Holyrood Distillery open, and we’re looking forward to creating a range of delicious whiskies, gins, liqueurs and other spirits,” said Rob Carpenter in a prepared statement. “I’d like to thank everyone who has contributed to this project throughout its evolution for their hard work and passion – and especially all our local neighbors for bearing with us during the construction process.

“This distillery is open to everyone, whether you’re a local resident or you’re just visiting the city for a day. We’ve worked hard to create a series of tours that are both fun and informative so they appeal to a wide range of visitors, from connoisseurs of whisky and gin to those who are simply curious to learn more about these spirits for the first time.”