Glen Scotia Distillery recently joined forces with Document Scotland for a photographic exhibition showcasing the history and heritage of Campbeltown, the whisky capital of the world in the Victorian era.

A collective of three Scottish documentary photographers, Document Scotland shares what’s described as a vision to witness and photograph the important and diverse stories in Scotland. Through the partnership with Glen Scotia, Sophie Gerrard, Colin McPherson and Jeremy Sutton-Hibbert captured modern-day photography of Campbeltown by exploring the themes of People, Place and Process, to tell the story of Glen Scotia and Scotland’s fifth malt-producing region.

Combined with historic photography of the distillery and the region, these images from the past and the present are featured in an interactive online gallery to celebrate Campbeltown’s contribution to Scotch and discover Glen Scotia’s history. 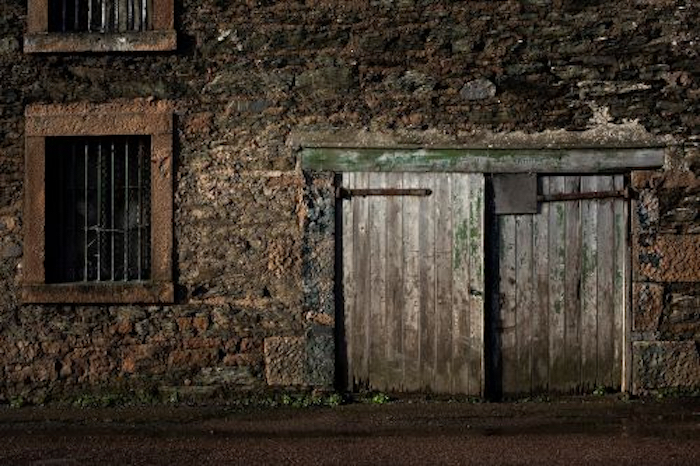 A wooden door on a mothballed distillery building on Glebe Street exposes the enduring remnants the industry has left on the town that was once the ‘whisky capital of the world’, due to the immense number of distilleries that were located there (image via Colin McPherson/Document Scotland)

“Since 1832, Glen Scotia has been shaped by the people, time and events; as well as the history of Campbeltown itself, and this remarkable Document Scotland photographic exhibition brings our unique whisky history and heritage to life,” Master Distiller and Distillery Manager at Glen Scotia Iain McAlister said in a prepared statement. “Our single malt reflects centuries of craftsmanship and experience associated with the region and is renowned for its Campbeltown character.”

Campbeltown was once known as ‘Spiritville’ or ‘Whiskyopolis’ and at its peak in the Victorian era, there were around 30 legal distilleries operating in a town with a population of only 9,000. Glen Scotia stands as one of only three surviving single malt whisky distilleries located there today.

The exhibition is displayed as a part of the Glen Scotia Virtual Malts Festival 2021, which recently welcomed thousands of whisky fans from across the globe to experience a range of online tours and tastings from the distillery.