Highland Park out of Scotland is known to a lot of Scotch single malt drinkers for sometimes being heavy on the sherry cask influence during the maturation process for their bottlings. They also make use of the typical bourbon casks and, sometimes, unveil one off expressions such as a port cask aged expression from a few years back. They are now stepping out a bit into red wine influences with a new offering that’s partially matured in rioja seasoned wine casks.

The new Highland Park Twisted Tattoo 16 Year Old, according to those behind it, is aged in in rioja (a red wine from Spain) seasoned wine casks and first fill bourbons casks. The introduction of the former into this whisky brings forward some soft red fruits into the tasting profile, as well as giving its color a “soft rose tint.” 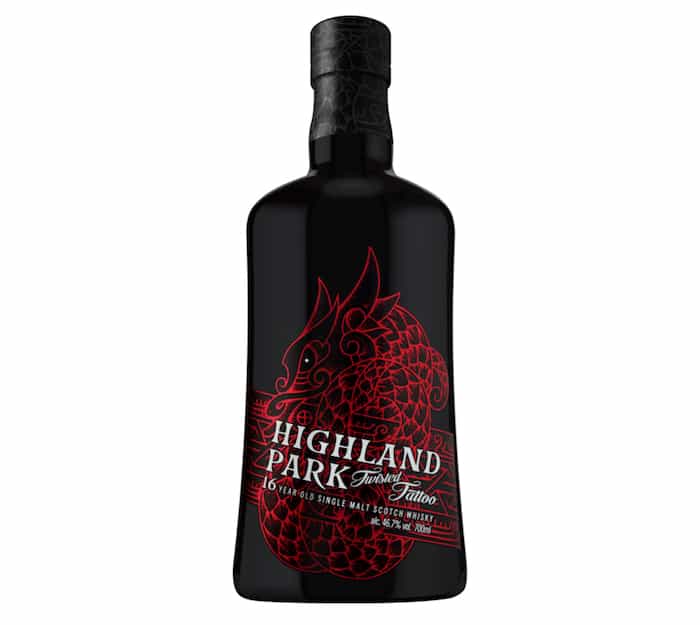 Beyond the rioja cask influence, Highland Park is highlighting this Scotch with a strong tattoo association. Its bottle sports a rather unique image on its front that’s been inspired by the distillery’s home location of Orkney’s “Norse ancestry and the Viking legend of the Midgard Serpent which grew so large it twisted around the earth to bite its own tail.” To this end a Danish tattoo artist, one Colin Dale, was consulted to create it.

Dale is said to specialize in the ancient art of dot-work tattooing, a freestyled, non-electric tattoo technique, and his “research has helped to reintroduce the lost tattooing techniques of the Nordic, Native American and Inuit cultures. His studio, Skin & Bone, uses both traditional and modern techniques to tell stories on skin.”

“For us,” said Jason Craig, global brand director, Highland Park, in a prepared statement, “Colin Dale was an ideal choice as a creative partner. He is the perfect example of a modern-day Viking Soul and our partnership show off the similarities between our crafts. Tattoos are emotionally important and tell stories on the skin, much like our whisky tells the tales of our Orkney islands’ ancestry. Both arts can be traced back hundreds of years with the traditional skills still playing a key role in the tattooing and whisky making process today.”

Highland Park Twisted Tattoo is bottled at 46.7% ABV, and prices at £80, or around around $105 USD. You’ll find some official tasting notes below for your consideration from the distillery.