Has Investing In Rare Scotch Hit A Bubble Moment? - The Whiskey Wash

Has Investing In Rare Scotch Hit A Bubble Moment?

A slight downturn in investing in Scotch as a commodity was due to happen sooner or later, but is it just a blip or something to truly be concerned about?

The secondary market for rare Scotch whisky as an investment tool (i.e. the buying and selling of select bottles from the likes of The Macallan and Dalmore) has been on a tear in recent years, as we’ve covered here pretty extensively. Values of bottles have risen higher and higher, more auction houses have opened and an increasing number of rare bottles have been released to market from both distilleries and private collections. While all of this has served well to line the pockets of sellers with cash, it isn’t a ride that could go unchecked forever, at least according to new information from Rare Whisky 101, a UK firm that bills itself as “whisky analyst, broker and investment experts.”

Rare Whisky 101, in its half yearly report for 2019 [opens as PDF] on the investment market for Scotch, noted that a slight decline has, in fact, happened. In their evaluation of the sector, they noted their broadest measurement of the market, the Apex 1000 index, had seen a first ever half year drop of 0.26%. This compares with an increase of 9.91% during the same period last year. 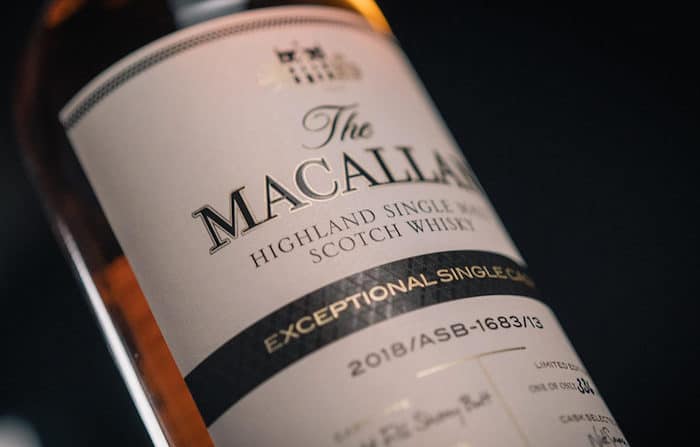 The Macallan Exceptional Single Cask 1950 bottling (image via The Macallan)

Said reasons for this dip include “over supply of whisky during the early months of 2019, the continued proliferation of new-start whisky auction-houses, and a decline in the performance of the Macallan – the secondary market’s most dominant distillery by both volume and value.”

In terms of some specific figures related to the first half of the year market, noted the firm:

Interestingly, while Scotch whisky “has underperformed against other markets and traditional investments throughout the first half of 2019, including FTSE 100, Brent Crude, and Gold, it has still significantly outperformed those very same asset classes over the mid to long term, having increased 160% from December 2014.”

“On the back of 10  subsequent years of growth in the investment performance of rare whisky,” said whisky investment analyst and co-founder of Rare Whisky 101, Andy Simpson, in a prepared statement, “we have seen … the rare whisky investment market’s first ‘blip’ since we started reporting these results. Collectors, investors and buyers would be well advised to note the dip. At this stage we do not believe it indicates the start of a longer-term downward trend. In fact, looking the last three months of H1 alone (April to June) the Apex 1000 index returned to slightly more significant growth of 1.29%, moving from 825.92 points to 836.55.

“We remain confident that the right bottles from the right distilleries will continue to offer a strong investment proposition. In fact our later than usual reporting of the half year figures has allowed us to see growth return to the market as the supply/demand equation has re-balanced. However, continued uncertainty over the UK’s post-Brexit future makes it very difficult to predict how the market will perform in the latter months of 2019.”