Halloween is almost upon us. It’s a holiday that’s easy to dismiss as just for kids, but I think adult Halloweens have a distinct pleasure all their own. If you don’t have you own kid to dress up in an outrageously adorable costume, there’s always the fun of answering the door to your neighbor’s kids in their mummy, witch, and Darth Vader costumes – plus, of course, the opportunity to sit around eating candy never really loses its appeal.

Of course, now that we’re adults, we can pair our candy with something a little more grown-up than the sugar water in those gross little wax bottles. And fortunately, whiskey goes wonderfully well with Halloween candies of all sorts. Well, most Halloween candies, anyway. 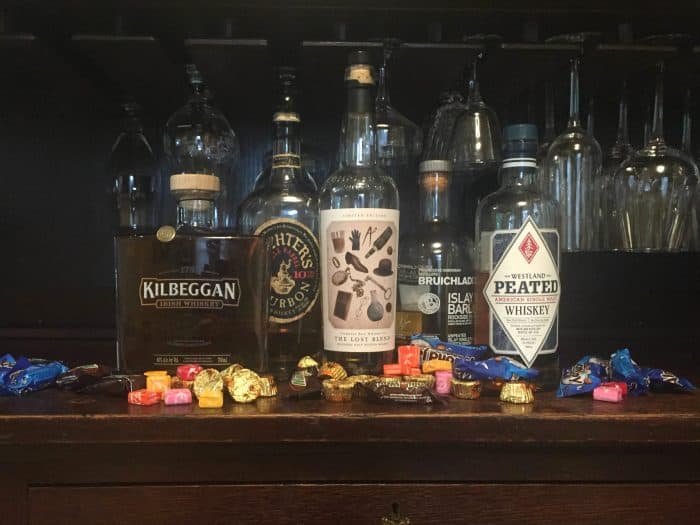 Let’s start with the easy stuff. Creamy caramel and vanilla nougat are a perfect match for Kentucky bourbon. A stiff pour of Elijah Craig and a fun-sized Milky Way bar will get you in the Halloween spirit faster than anything else we can think of, but other bourbons work too – Michter’s, Evan Williams, even craft bourbon like Balcone’s Texas Blue Corn Bourbon all have their charms.

This cheerful little chocolate is almost too easy to pair with whiskey. Coconut, almond, and chocolate all jive perfectly with seemingly everything we tasted alongside, from bourbon to blended Scotch. Paired with a Single Barrel Old Forrester expression, this was a grand slam, but it even stood up to mildly peated Scotch expressions, like Compass Box’s Lost Blend.

Now things start getting tricky. The tropical taste of Starburst candy clashes with the rich, dark flavors of many American whiskies – but some of the lighter Scotch single malts have tropical flavors of their own. Starburst and Bruichladdich’s Islay Barley worked, but only for the red and pink flavors; the tart tones of orange and yellow made the Scotch taste like medicine. I found that darker, bolder rye, like Crown Royal’s Northern Harvest Rye or Lock Stock & Barrel, worked better for the citrusy flavors.

This was a tough one. The intense sourness of Sour Patch Kids clashes unpleasantly with oak tannins, and too much sugar makes even the sweetest whiskey taste flat. Pair Sour Patch Kids with a rye whiskey or high-rye bourbon, and the combination of herbaceous grain and citric acid gets you a flavor that tastes very much like Coca-Cola, tooth film included.

However, when viewed from the perspective of a whiskey sour, Sour Patch Kids offer a few more opportunities. We tried soaking three gummies in an ounce of unremarkable rye whiskey for two hours, and then shaking aggressively with ice. The result looks terrible – murky, with little bits of dissolved gunk floating around – but actually tastes pretty good, way better than a whiskey sour made with the cheap day-glo mixer you can buy at the grocery store. Just be sure to serve it in opaque cups. Now that’s what I call a trick and a treat.