The Glenmorangie single malt Scotch whisky brand recently opened the doors to a new “innovation distillery” – a place they are looking to to bring a kaleidoscope of new flavors to their single malts.

Glenmorangie is seen by many as pushing single malt boundaries for decades. From pioneering wood finishing to Glenmorangie Signet mocha flavors, and a unique Private Edition series, Director of Whisky Creation Bill Lumsden constantly experiments and dreams up new whiskies for consumers to enjoy.

Lumsden’s “what if?” approach has now inspired the Lighthouse, the first on-site “innovation distillery” dedicated to a single malt brand, and created solely for experimentation. Conceived to bring Lumsden’s ideas to life, it’s a playground where he and his team can let their imaginations run wild. 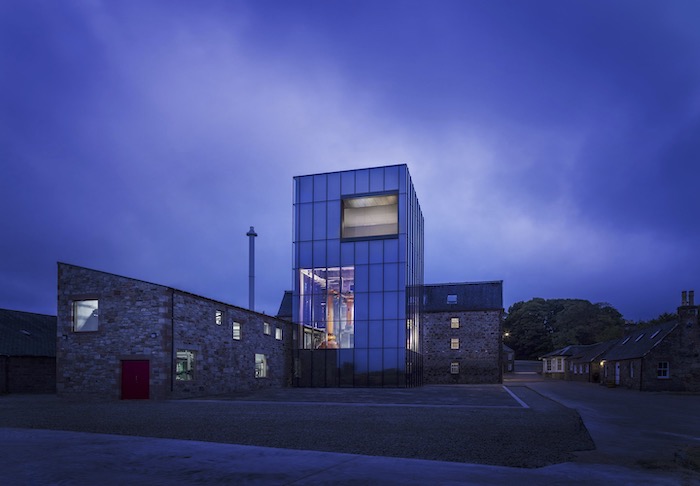 The multi-million-pound Lighthouse is named for its unique approach to whisky. Like an actual lighthouse, the 20-meter-high stillhouse can be seen for miles around.

The innovation distillery stands at the heart of Glenmorangie’s Highland location, with its tall glass stillhouse a new landmark for the site where the brand has been creating its single malt since 1843.

Designed by Paris-based Barthélémy Griño Architects, it will give Glenmorangie’s whisky creators flexibility at all stages of their whisky-making, enabling them to vary the character of their spirit.

The innovation distillery was created for experimentation rather than yield. Areas of innovation include, according to information from them:

Lumsden said of the Lighthouse in a prepared statement, “We will indulge our most fantastical ideas as we strive to create a whole array of different flavors. We will play with raw ingredients, and make small adjustments and big changes in ways never tried before. Nothing is off limits, as long as it’s delicious.”

Thomas Moradpour, President and CEO of The Glenmorangie Company, said that global demand for Glenmorangie is growing significantly and the Lighthouse experimental distillery is the keystone of their plans to stay at the forefront of taste innovation. “By giving our talented creation team free rein, we will welcome even more consumers worldwide to enjoy delicious whiskies,” he added.

This soft, fruity 12-year-old limited edition is inspired by the wondrous flavours yet to emerge from the Lighthouse innovation distillery. Aged in bourbon and sherry casks, it is uniquely bonded with its namesake: fragments of its casks are embedded in the walls of the Lighthouse, where they will play their part in the Distillery’s whisky creation for years to come. Just 3,000 numbered bottles exist. Glenmorangie Lighthouse is non chill-filtered and bottled at 48% ABV. It will be available exclusively from the Distillery Visitor Centre.

85
Shares
1.1k
Views
Share on FacebookShare on TwitterGet Our Newsletter
Get The Macallan® Rare Cask at ReserveBar. Shop now!