One day while snowed in at home, Glenmorangie’s Dr. Bill Lumsden, their director of whisky creation, began dreaming of a whisky that captured the coziness of wrapping up in a winter sweater.

And that’s when he brought Glenmorangie’s A Tale of Winter to life.

Finished in Marsala wine casks from Sicily, this 13-year-old single malt Scotch whisky is described as being ripe with fruit and honey notes, along with hints of cocoa dust and warming spice. 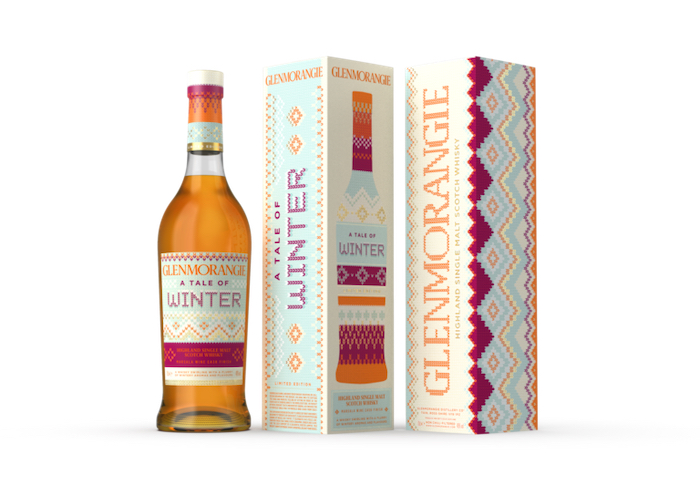 This whisky got its start years ago, when Dr. Bill pulled on his most colourful winter knit at home in Scotland after what’s described as a spectacularly heavy snowfall. He pondered that ‘what if’, could he capture the joy of cozy moments indoors by the fire, while snow lay all around?

With this wintry whisky in mind, Dr. Bill took a bit of Glenmorangie whisky mellowed in bourbon casks and finished it in casks which once held Sicily’s fortified Marsala wine, loved for its sweet and fruity flavors.

“We all know the delight of snuggling up in a winter jumper by the fire, when it’s snowy outside. With flavors as bright and vivid as my favorite woollen sweater, Glenmorangie A Tale of Winter deliciously captures those magical, cozy moments,” Dr. Bill said in a prepared statement. “The experience begins with light flurries of fruit and honey, building to torrents of cocoa dust, flakes of red pepper and chunks of Brazil-nut toffee. It culminates in a feels-like-forever finish that swirls with cinnamon, ginger and clove.”

Glenmorangie A Tale of Winter will be available in the UK starting this month, with a suggested retail price of £75. Official tasting notes are below for this 46% ABV expression.